Focus on The Testaments - Booker Prize 2019 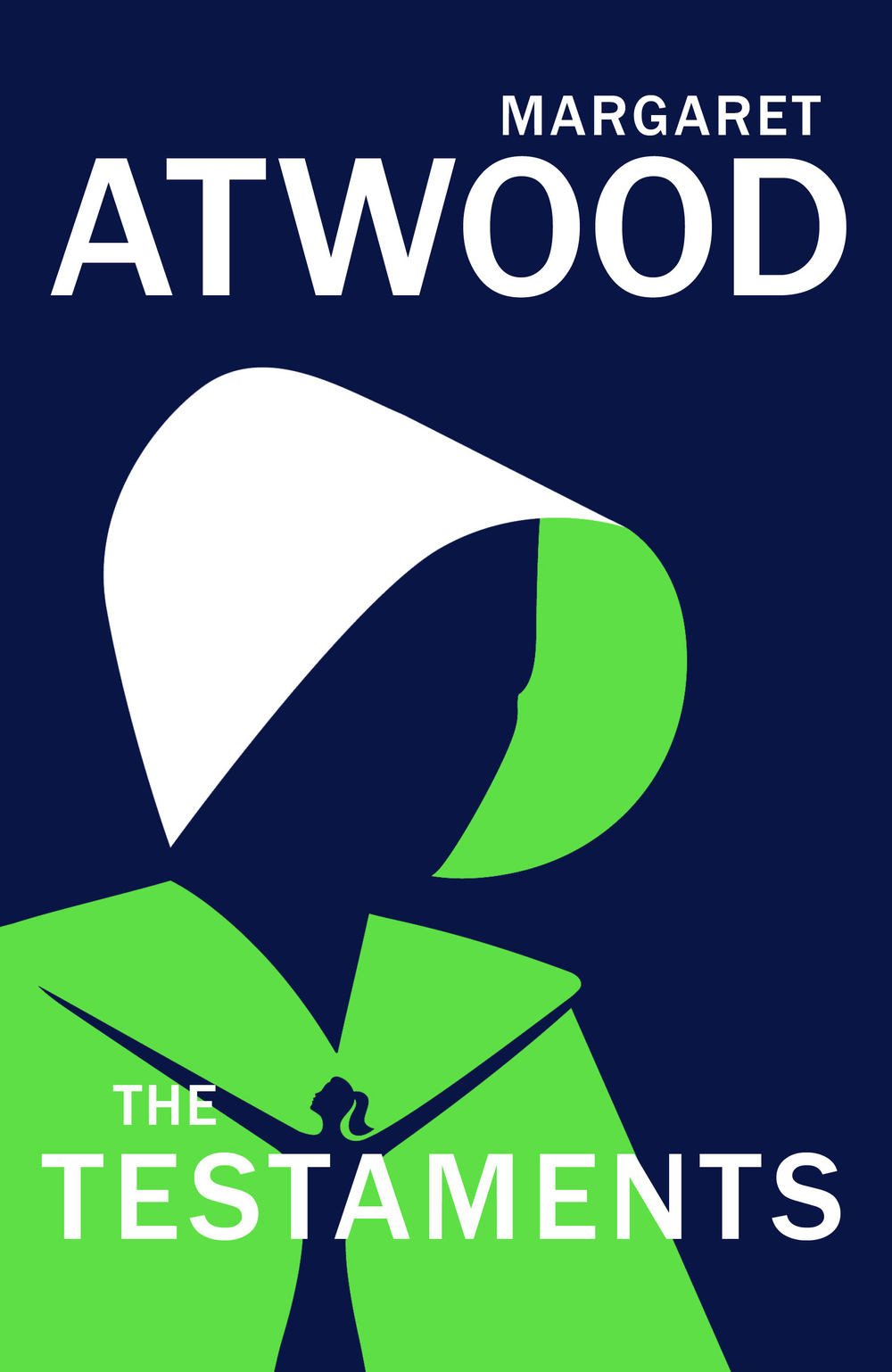 Margaret Atwood’s dystopian masterpiece, The Handmaid’s Tale, is a modern classic. Now she brings the iconic story to a dramatic conclusion in this riveting sequel.

More than fifteen years after the events of The Handmaid’s Tale, the theocratic regime of the Republic of Gilead maintains its grip on power, but there are signs it is beginning to rot from within. At this crucial moment, the lives of three radically different women converge, with potentially explosive results.

Two have grown up as part of the first generation to come of age in the new order. The testimonies of these two young women are joined by a third voice: a woman who wields power through the ruthless accumulation and deployment of secrets.

As Atwood unfolds The Testaments, she opens up the innermost workings of Gilead as each woman is forced to come to terms with who she is, and how far she will go for what she believes.

Back in the early summer of 2016 Alison, who is a school librarian, realised she had never been in a book club but had to run one at her school. After looking around locally she realised there didn’t seem to be any in the area, so thought “Why not start one?”

The local coffee shop recommended advertising the idea on a local neighbourhood networking site. From this, she was delighted to get a good number of enquiries and arranged a meeting in a local pub (just in case anyone was an axe murderer)! Following this meeting Bolton Bookworms was created, with 8 founding members.
The group consists of people of varying ages and professions including; a Union Convener, 4 people within the education sector, an insurance broker and an A & E Doctor, an unusual mix!

We take it in turns to host meeting nights and pick the books, which leads us to reading a wide range of genres. We have so far covered everything from classic to fantasy and just about everything else in between, including modern Japanese fiction, autobiographical and biographical memoirs, young adult fiction and previous Booker Prize nominations.

Our latest book selection was The Handmaids Tale by Margaret Atwood which has tied in very nicely with the book we have been asked to shadow for the 2019 Booker Prize. 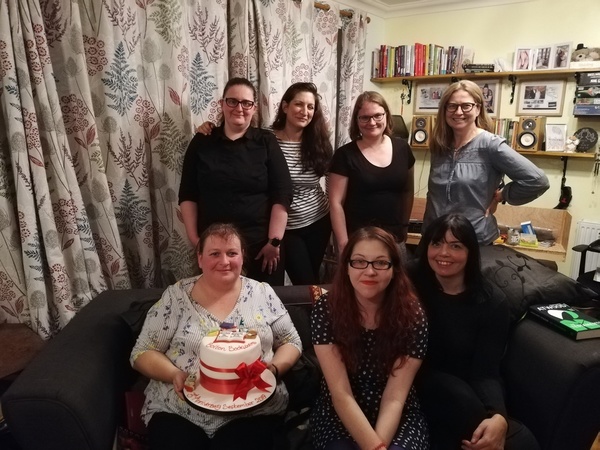 We read ‘The Handmaid’s Tale’ for our September meeting where it received an overwhelmingly positive response, stimulating lively and wide-ranging discussion, so it was with some apprehension that we turned to its sequel, the Booker Prize nominated ‘The Testaments’; could it possibly be as powerful, as astonishing as the original novel? There isn’t room to cover everything we talked about over wine and cake, but it feels important to say from the outset that the conversation was remarkably animated; I’m not sure any book we’ve previously read together has led to such energetic and far reaching exchange.

We started our discussion considering what the effect was of setting The Testaments 15 years after the Handmaid’s Tale ended. Overall we liked this; it allowed the reader to have an insight into how the regime had established itself as the new normality – we were introduced to a generation of girls who had known nothing else and who accepted their clearly defined role in society, with some even thriving, looking forward to being married and a chance to run their own household. Setting it more than a decade later also meant that cracks in the regime had had time to appear, and offered tiny glimmers of hope that the future may not be as bleak as it appeared at the end of The Handmaid’s Tale – at the very least there was a presentiment of change.

Unlike the intimate, almost claustrophobic intensity created by the use of the first person narrator in The Handmaid’s tale, the different perspectives of three narrators, including one from outside of Gilead, gave a different feel to Testaments. We all remarked upon the quicker pace, the feeling of forward movement and an overall more positive, hopeful tone. While it lost the intensity provided by a single narrator, it allowed us to sympathise with other characters (Aunt Lydia in particular) and by having three voices rather than one, we felt we could trust what we were reading – the element of unreliable narrator was removed and we were seeing the truth, as far as truth exists in history. We also commented on the different time periods covered by each individual narrator, from a few weeks to more than 9 years, which was felt by some of us to create confusion in the narrative.

We moved on to talking about the characters, focusing on but not limited to aunt Lydia and Agnes. Does Aunt Lydia’s long term goal of destabilising the regime excuse her enabling its terrible, violent acts for so many years. Did she even have a choice? Were there similarities between Daisy and Agnes despite the very different worlds in which they lived, and what was the significance of them both losing their adopted mothers in childhood – did this change the story arc? We felt that each character had depth and had we had more time could, for example, have talked in a similar manner about Becca or Commander Judd.

The quote “History doesn’t repeat itself but it rhymes” provoked a lot of discussion about parallels between the Gilead regime and events in our world both before and since The Handmaid’s Tale was written. We wondered whether, as in Gilead, corruption in any religious regime was inevitable then touched on Trump, the rise of the Christian Right, the Me Too movement, reproductive rights in Ireland, the role of Saudi Arabia, climate change, refugee crises and many more. We became conscious that with all of these, just as in Gilead, the outside world seemingly unbelievably carries on, powerless to act and preoccupied by other issues.

There is so much more we talked about – the similarities between becoming a nun and the steps to becoming an Aunt, the subtle nods to the bible, the significance of the colour green (the dresses, Daisy’s hair, the name Jade, the book jacket), the benefits – or otherwise – of watching the TV series, but time doesn’t allow this. Perhaps we should simply say that ‘The Testaments’ is a gift to book clubs, there is really so much to examine and review, so many directions in which to take the discussion. As individuals there were parts of the book that we didn’t always like, the language and characterisation of Daisy didn’t feel quite right, some felt the escape from Gilead was too easily achieved and the ending too convenient, too trite. But as a group we would unhesitatingly recommend “The Testaments” to anyone who has read ‘The Handmaids Tale’ and we are excited to see the verdict of the judges on the 14th October 2019.

We are Gloucester Book Club and we began in 2013. There is so much demand in our local area for a place to talk about books, that our membership has grown and grown. We are so lucky to have members across all age ranges, professions, backgrounds and genders. We all bring different experiences to our lively discussions which never fail to entertain and stimulate. We read across genres, including non-fiction, but mostly we concentrate on contemporary fiction.

In the past we’ve been involved in several projects due to our association with the Reading Agency. We are really pleased and excited to be shadowing the Booker Prize 2019 and we can’t believe our luck to be given The Testaments by Margaret Atwood! Stay tuned for our musings on Twitter, Instagram and gloucesterbookblog.wordpress.com. 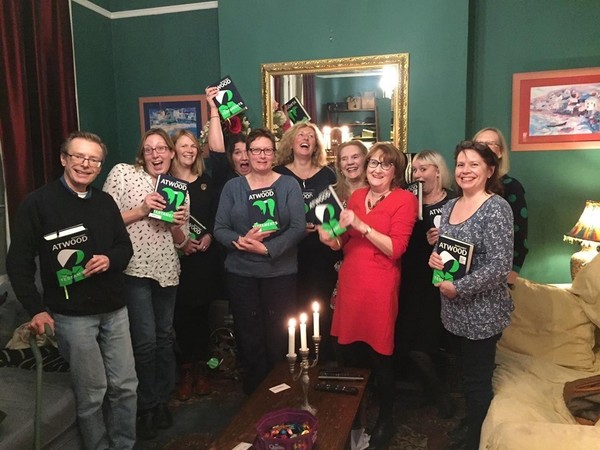 Gloucester Book Club was given an opportunity by the Reading Agency to shadow this year’s Booker Prize and couldn’t believe our luck when we found out we were allocated The Testaments by Margaret Atwood. It’s the long awaited sequel to Handmaid’s Tale, set in an unravelling dystopian Gilead, with three female narrators with three diﬀerent testimonies, all of them connected. Could a sequel ever be as good as the original?

Having read Handmaid’s Tale, some members felt disappointed that Testaments was so diﬀerent in style, less gripping and lacking in the menace of the original. They did not feel the same emotional attachment to Testaments’ characters, except for Aunt Lydia. Perhaps colouring in the ambiguity of Handmaid’s Tale’s creates a downside for some.

However, many members loved it, and described it as “exciting, enthralling, hugely satisfying and thoroughly recommendable”.

Whether as a stand-alone novel, or as a sequel to Handmaid’s Tale, it is certainly compelling, easy to read and rattles along at a fast pace. One uncomfortable fact that Atwood has said is that everything that has happened in Gilead, especially the treatment of women, has already happened somewhere in the world.

One of our members describes The Testaments as a welcome gift that Atwood has given us. It certainly feels that way and also poses the question, how far are we from Gilead?

With so many great contenders for this year’s Booker, the bar is set very high and it will be interesting to see whether The Testaments can soar to the dizzy heights of winner. Whatever happens, our book club is so pleased to have read it and we will continue to marvel at Margaret Atwood’s incredible, skilful writing.

Have you read The Testaments? Do you want to know what other readers thought? Leave your own review online.

Want to know more? Download a Readers’ Guide for The Testaments, including information about the author, as well as some discussion notes and themed reading.