Bring Back the King: The New Science of De-extinction by Helen Pilcher - discussion questions 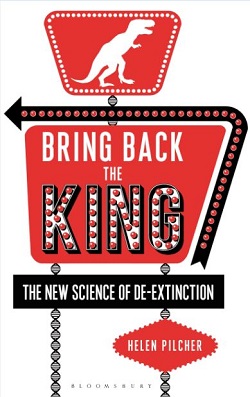 De-extinction – the ability to bring extinct species back to life – is fast becoming reality. Around the globe, scientists are trying to de-extinct all manner of animals, including the woolly mammoth, the passenger pigeon and a bizarre species of flatulent frog. But de-extinction is more than just bringing back the dead. It’s a science that can be used to save species, shape evolution and sculpt the future of life on our planet.

In Bring Back the King, scientist and comedy writer Helen Pilcher goes on a quest to identify the perfect de-extinction candidate. Along the way, she asks if Elvis could be recreated from the DNA inside a pickled wart, investigates whether it’s possible to raise a pet dodo, and considers the odds of a 21st century Neanderthal turning heads on public transport.

Below are some reviews for this non-fiction book:

“Science at its funniest!”
Sara Pascoe, writer and comedian

“Leaping off the page are insights into many charismatic and neglected species, and the amazing humans who fight to preserve our future. This revolution will inspire our generation the way that voyages of the Beagle and Apollo have before it.”
George Church, Professor of Genetics at Harvard Medical School and Director of PersonalGenomes.org

“A fluid and witty writer; up there with Bill Bryson.”
Dr Karl Kruszelnicki, science commentator, author and presenter

“Pilcher … asks provocative questions about both the nature of science and what it means to be human.”
Publisher’s Weekly

There are some discussion questions for you to download. Remember to write your thoughts in our Book review section.