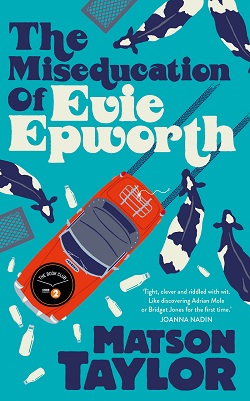 The Miseducation of Evie Epworth, the wonderful debut novel by Matson Taylor, has been chosen for the Radio 2 Book Club, and will be on the show on Monday 10 August.

To apply, please log in and fill in your details below before Friday 14 August.

The Miseducation of Evie Epworth

Sixteen-year-old Evie Epworth stands on the cusp of womanhood. But what kind of a woman will she become?

The fastest milk bottle-delivery girl in East Yorkshire, Evie is tall as a tree and hot as the desert sand. She dreams of an independent life lived under the bright lights of London (or Leeds). The two posters of Adam Faith on her bedroom wall (‘brooding Adam’ and ‘sophisticated Adam’) offer wise counsel about a future beyond rural East Yorkshire. Her role models are Charlotte Bronte, Shirley MacLaine and the Queen. But, before she can decide on a career, she must first deal with the malign presence of her future step-mother, the manipulative and money-grubbing Christine.

If Evie can rescue her bereaved father, Arthur, from Christine’s pink and over-perfumed clutches, and save the farmhouse from being sold off then maybe she can move on with her own life and finally work out exactly who it is she is meant to be.

Matson Taylor grew up in Yorkshire but now lives in London. He is a design historian and works at the V&A museum, where he teaches on the History of Design programme and spends a lot of time trying to convince people that the luxury goods industry helped win the Second World War. He wrote a chapter on Edward Molyneux, inventor of the flapper dress, for the V&A’s London Couture book and has helped develop a number of projects for TV and radio. He also works at Imperial College, helping scientists communicate very complicated things in a reasonably simple way.

As well as working at various universities and museums around the world, Matson has worked on Camden Market, appeared in an Italian TV commercial, and been a pronunciation coach for Catalan opera singers. The Miseducation of Evie Epworth is his first novel.