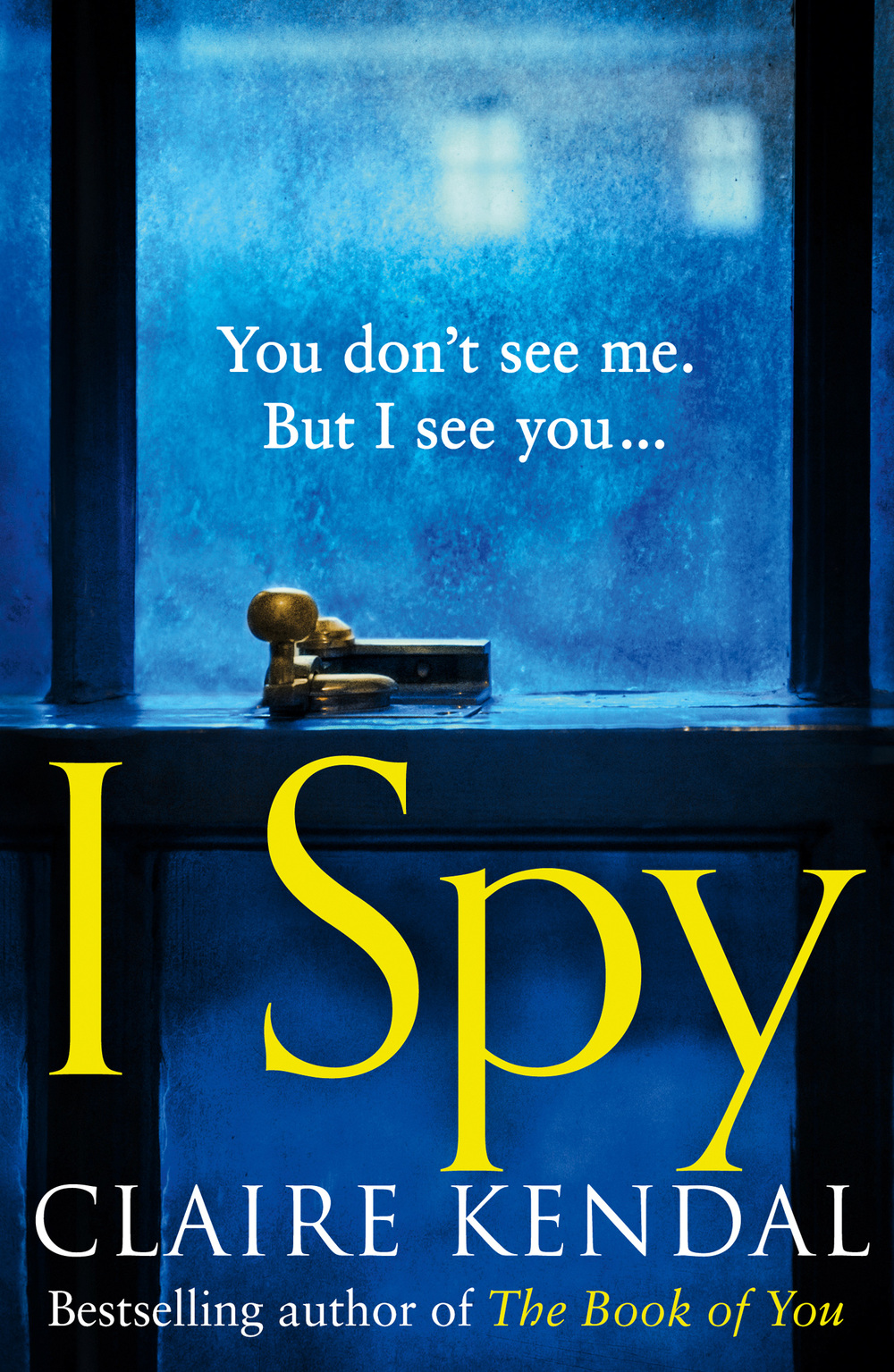 Claire Kendal is the author of the top ten bestseller, The Book of You, which was chosen as a Richard and Judy pick. Find out about I Spy, the chilling new psychological thriller in this fascinating Q&A and enter our competition to win a copy of the book.

I Spy cleverly mixes elements of the psychological thriller with elements of the spy novel. What made you want to join those two genres together, and how difficult was it?

The novel’s shout line is You don’t see me, but I see you. I think this really plays up the natural affinities between domestic noir and the spy thriller. These days, we all have the capacity to be spies, and we are all spied upon. There are so many levels of spying. Domestic, national, international. These levels are more fluid than we imagine. We are more involved in these processes and exchanges than we realise.

Where did the story come from?

So many things go into making a novel. But one of the key things that caught my attention happened while I was working on my previous book, The Second Sister. I became very interested in the male undercover detectives who became ‘deep swimmers’. That’s the term for people who go so profoundly undercover they stay for long periods in their fake lives to spy on people. These men infiltrated activist groups, some of them forming long-term relationships with female members and even having children with them.

I wondered what the story would look like if the agent were a woman, and if it were the agent herself who became pregnant, rather than the target. And I kept replaying that question would-be spies are always asked. How far would you go to save your country, to save someone you love, to save your own life? Holly, my heroine, is faced with this question.

How much of I Spy is grounded in reality?

First off, with I Spy I wanted to explore that very intimate kind of spying. Most of us can easily get hold of the tools of a spy. We walk around with phones, with location sharing, with portable devices that can photograph and record. So there is this very domestic, very personal spying that lovers have the capability of doing to each other (and parents to their children – or the reverse!).

I Spy also deals with coercive control, a very domestic problem, and there seems to me to be a confluence between coercive control and spying. Holly is increasingly certain her partner, Zac, is spying on her. His response is to gaslight her, to tell her she is imagining it. Plus, there is an additional element that increases her vulnerability – pregnancy. This intensifies the situation she is in, her susceptibility to having her sanity questioned. Zac exploits that cliché about how it must be your hormones making you crazy. There are so many ways that being pregnant makes everything more dangerous for Holly.

Second, there is the more general sense in which all of us are spied on, given the explosion of intrusive technologies that monitor millions of people and can be used not just by government agencies but by private companies. So far, these technologies are not adequately regulated and safeguarded, and the balance between public protection and privacy has not been properly debated. CCTV is everywhere, and we now have facial recognition too. Every phone call we make is logged. Every document we download, every ‘Buy Now’ button we hit, every email we send – all of these are scanned for key words, so that our movements can be tracked in real time, without our permission. Think Edward Snowden. Think WikiLeaks. Many of our employers are at it too.

Third and finally, there is the real espionage sanctioned by our governments and enacted by our intelligence services.

I Spy weaves these different levels of surveillance together, so that they all become extra-potent. Out of this blend came an ending that I hope readers will find powerful and thought-provoking. I think it may be the best one I’ve ever done in a novel. In any case, it’s a twist that punched me in the stomach when I realised it had to happen.

Did you do a lot of research in order to write this novel, particularly for the spy elements?

MI5 and GCHQ tend to be a little shy of sharing their secrets! In all seriousness, though, you just have to make stuff up, which thankfully is what novelists are supposed to do. But you try everything you can to research what information is available, read first-hand accounts by agents, watch documentaries about the history of the intelligences services, read spy novels, sit in the public gallery of criminal trials, engage with the testimonies of victims, talk to professionals, visit the locations you are writing about…

One of my favourite research tools was the quizzes you can find on our intelligence services’ websites. I took them all, and some American ones too. To my astonishment, I discovered that I am ‘MI5-Ready’. Of course, I was super-proud, so I told my husband and he said, ‘That’s the result everybody gets when they take those tests’. He is MI5-ready too, so perhaps he is right. Here are some of their quizzes, so go ahead and see for yourself.

In some ways, though, my job was made easier because my real interest was in what an ordinary person might do if they were approached to act as an agent, or what the Americans call a ‘human asset’. In Holly’s case, she is asked to spy on her partner. It’s not an unheard-of event. What tools and strategies would a civilian use to do this? I think that is the consistent thing in my novels – the idea of someone like you or me in an extraordinary situation, and in extremity. Holly isn’t in a James Bond film with an endless supply of bespoke gadgets.

And, as I said, she is pregnant. I spent a lot of time thinking about what that would look like, because I haven’t come across many pregnant spies in novels. I did a lot of research into some of the medical conditions that affect her. As a novelist, I try very seriously to be accurate about all the physical, social and psychological factors that shape my characters. I went to a symposium at the Royal College of Medicine that was informative, moving and inspiring. Because Holly works in a hospital as a ward clerk, I needed also to find out lots of details about that job.

Over the course of your novels you have created many memorable characters – do you have a favourite among them?

The truth is that I love them all. Except Rafe in The Book of You. I don’t love him.

I wonder if I should confess something about my first heroine, Clarissa? I feel protective of her, because some readers have been enraged that she isn’t stronger. A few went so far as to say they wanted to slap her. Clarissa is in no way equipped to deal with the man who stalks her. Few of us would be. She isn’t a superhero and that is why she is special to me. I feel defiant about Clarissa’s sense of helplessness, because I was determined in the novel to be as true as I could to the reality of what happens to victims of stalking. The victim-blaming that is central to the book’s plot has been replicated in some responses from readers. Even now, this upsets and disturbs me.

But perhaps it’s true to say that your most recent heroine is always your favourite. So right now I’m all about Holly and I Spy. I seriously adore her.

In all of your novels, has there ever been a scene that you found particularly difficult to write, and if so, why?

Yes, but I can’t say exactly what the scene was in I Spy without providing a huge spoiler. Readers will probably guess when they come to it. I was sobbing as I wrote that scene. My husband came into my study as I was typing. Some serious ugly-crying. He was aghast, thinking that something terrible had happened in real life.

It’s odd, because I dealt with some incendiary material in The Book of You, but I had this strange detachment while writing it – the distress and shock at what I’d done didn’t come until after I finished. The Second Sister made me weep, but those tears were gentle. Nothing has ever hit me like I Spy. You might ask, Then why do it? The answer is that the events of a novel have an inevitable force and trajectory. You can’t evade them. You can’t run away from what you are doing, or distort it to make things easier. Novels are not literally ‘true’ but they have their own truth, I hope.

What is the best thing about being a writer?

Writing a novel is like falling in love. When I’m immersed in one, it’s all I can think about, the only place I want to be, the only thing I want to be doing, and anything that tears me away from it is hard. Plus, it’s a kind of superpower. You’re making a world. You get to name the characters, to decide everything.

When you are not writing, how do you like to switch off and relax?

Not surprisingly, I read a lot. I sew when I have time, which these days is not often. I like country walks. I love Spain and the Spanish language, so I’m working to get to a level where I can properly speak and read and write it fluently. This is my current passion. I have a long way to go before I’m anywhere near doing these things, but I find the language endlessly fascinating and beautiful. It’s also an expression of my love for Europe, and my sense of my own European identity.

If you were being exiled to a desert island and could only take three books, what would they be?

Clarissa by Samuel Richardson, one of the longest novels in the English language and still my favourite. Sylvia Plath’s Collected Poems, the fantasy edition we need that contains everything and with no transcription errors. His Dark Materials and The Book of Dust by Philip Pullman (I think it is fair to count them as one – because the volumes together tell the full story, but I will put them back if Desert Island Discs tells me to).

Tell us why you’d like to win a copy of I Spy. Enter on twitter using #ISpy and tagging @ReadingAgency or by email. Competition open to UK residents only and closes on 7 July.