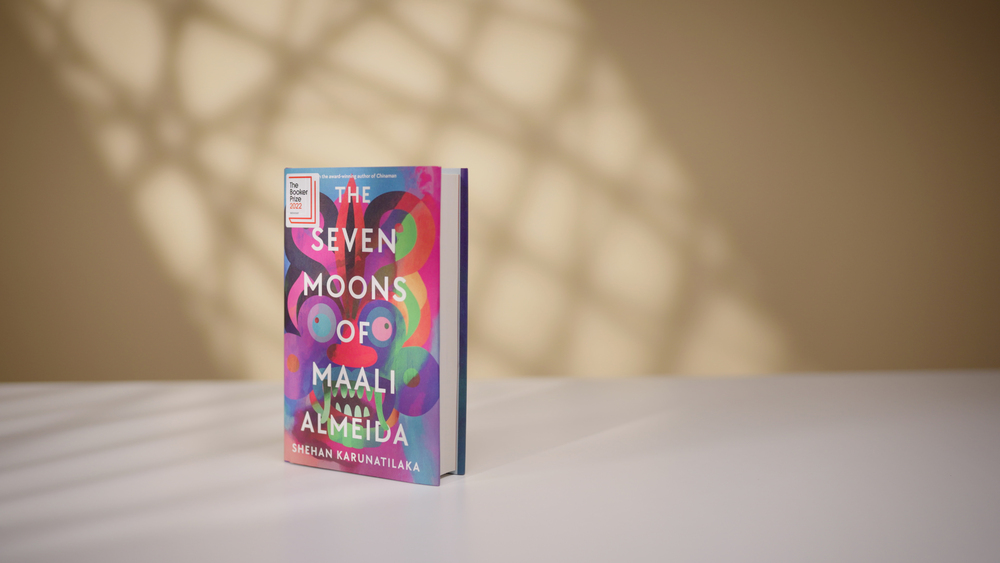 Last night, The Seven Moons of Maali Almeida by Shehan Karunatilaka was named winner of the Booker Prize 2022. The author was presented with his trophy by Her Majesty the Queen Consort in a new-look ceremony held at the Roundhouse, featuring a keynote speech by singer-songwriter Dua Lipa and hosted by comedian Sophie Duker.

The Seven Moons of Maali Almeida, published by the independent press Sort of Books, explores life after death in a noir investigation set amid the murderous mayhem of a Sri Lanka beset by civil war. In Colombo, 1990, war photographer Maali Almeida is dead, and has no idea who has killed him. He has seven moons to try and contact the man and woman he loves most and lead them to a hidden cache of photos that will rock Sri Lanka. It has been described by the Booker Prize judges as ‘whodunnit and a race against time, full of ghosts, gags and a deep humanity.’

It is Karunatilaka’s much-anticipated second novel; his debut, Chinaman (2011), won the Commonwealth Prize, the DSL and the Gratiaen Prize, and was selected for the BBC and The Reading Agency’s Big Jubilee Read last year.

Karunatilaka, who was born in Galle, Sri Lanka in 1975 and grew up in Colombo, said in an interview for The Booker Prizes’ website that ’Sri Lankans specialise in gallows humour and make jokes in the face of crises […] it’s our coping mechanism’.

When asked at longlist stage how he felt about winning the prize, he responded: ‘To make any longlist requires luck […] to have a novel about Sri Lanka’s chaotic past come out just when the world is watching Sri Lanka’s chaotic present also requires an alignment of dark forces. Unlike my protagonist Maali Almeida, I don’t gamble. So I don’t expect to roll two more sixes, though I will scream with joy if I do.’

‘Any one of the six shortlisted books would have been a worthy winner. What the judges particularly admired and enjoyed in The Seven Moons of Maali Almeida was the ambition of its scope, and the hilarious audacity of its narrative techniques. This is a metaphysical thriller, an afterlife noir that dissolves the boundaries not just of different genres, but of life and death, body and spirit, east and west. It is an entirely serious philosophical romp that takes the reader to ’the world’s dark heart’ — the murderous horrors of civil war Sri Lanka. And once there, the reader also discovers the tenderness and beauty, the love and loyalty, and the pursuit of an ideal that justify every human life.’

Karunatilaka has been praised for The Seven Moons of Maali Almeida by Tomiwa Owolade in The Guardian for ‘his ability to do artistic justice to a terrible period in his country’s history’. Lucy Popescu agrees, commenting in the Financial Times that it is ‘an ambitious novel, epic in scope (mixing tropes from thrillers, crime fiction and magic realism) and a powerful evocation of Sri Lanka’s brutal past.’ Kate Mcloughlin from The Times Literary Supplement highlights Karunatilaka’s ‘tinder-dry wit’ and ‘unfaltering ear for prose cadence’.

Karunatilaka received £50,000 presented to him by last year’s winner Damon Galgut, a designer- bound edition of his book, and the £2,500 given to each shortlisted author. As the winner, he can expect instant international recognition and a dramatic increase in global sales. He is also the recipient of a newly designed trophy. The Booker Prize has worked with Factum Foundation to reinstate the original 1969 Booker Prize trophy in memory of its creator, the beloved children’s author and illustrator Jan Pieńkowski, who died in February this year.

Looking to promote The Booker Prize winner in your library? We have a free digital pack and bookmarks that you can order from our shop here.

Dive deeper into the books on this year’s shortlist with extracts, interviews with the authors and discussion guides for your reading group here