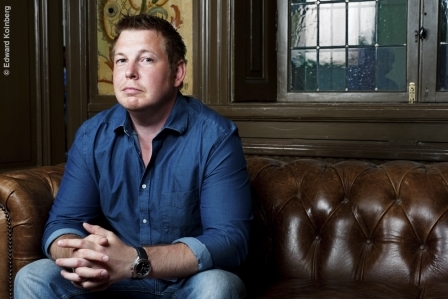 Fredrik Backman is a Swedish blogger, columnist and author. His debut novel A Man Called Ove was a number 1 bestseller across Scandinavia, an instant New York Times paperback bestseller, and has been made into an acclaimed film. Fredrik’s subsequent novels, My Grandmother Sends Her Regards and Apologises and Britt-Marie Was Here also went straight to number 1 in Sweden on publication. Britt-Marie Was Here is out in paperback on 17 November.

We offered 15 lucky reading groups the chance to read Britt Marie Was Here and quiz the author. Read on for his answers to their questions about pessimism, bicarbonate of soda and humbling powers of sport…

Part of the beauty of Britt-Marie’s story, like Ove’s, is that it gives readers hope that despite appalling experiences in life, people can come together and support each other. Have you always been an optimist or do your characters give you that faith in people? Our Little Book Club

I don’t think I’m an optimist. I know for sure my wife would never describe me as such. I just think that most people are not complete saints and not complete a**holes, most of us are somewhere in between. And I’m very interested in what happens when we meet each other there, in between. When we don’t really like each other, but have to admit that we need each other. The reluctant friendships. That’s my thing..

Gun violence, unemployment and poverty are tackled with sensitivity and humanity in Britt Marie Was Here. How did you go about researching these subjects? Our Little Book Club

I talk to a lot of people. I have some own experiences. And the rest I probably steal from watching strangers wherever I go. I’m very interested in people. I just don’t like them very much. But regarding “sensitivity and humanity”, I just try to write people as people. I try to assume most humans are defined by what they do, not by what they own. I’ve had times with no money, and times with a lot of it, I’ve been unemployed and I’ve had some much better times. I would hope my friends wouldn’t say I were different persons at either end of the scale. 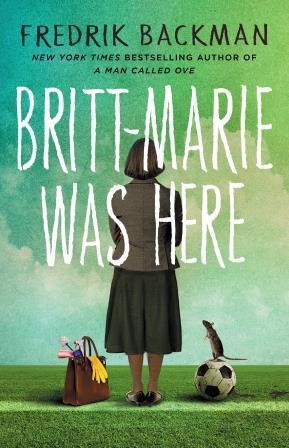 When you are writing a story, do you start with characters and build the plot around them? Or do you have an idea and the characters evolve from this? East Ayshire Library Reading Group

I always start with the characters. Always. I don’t know how to write the other way around. That’s why critics often say I have “too many unnecessary characters” and I sit at my kitchen table and scream “WHAT DO YOU KNOW IF THEY’RE UNNECESSARY? THERE WOULD BE NO STORY WITHOUT THEM!”.

Why do your books always involve a loner who eventually becomes a valued member of a community? Tree Book Group

I don’t think they do. But I’m not really interested in people with a lot of friends. Popular people are almost never interesting.

Astrid Lindgren. She’s number one. She was my best friend for the first half of my life without ever meeting me. That’s a great gift to give a kid. Her finest quality was that she never ever had to brag, she was this BRILLIANT writer, but she wrote everything in a way that everyone could understand. She never felt the need to show off. I love her for that. She belonged to everyone.

I loved this book, it is warm, kind and funny and reminds me not to forget that everyone has their own story. Do you have any personal experience with friends or family on the autistic spectrum? Portobello Reading Group

Well… yes. To be honest I guess there would probably be a few people in my life who would claim I’m at a few ‘spectrums’ myself, especially when I was a child, so I guess I’ve always been drawn to people who are different. Who think different. React different. I don’t diagnose people in my books, I’m not a psychiatrist, but I’ve come to understand many readers do. I don’t really know how I feel about it yet, to tell you the truth. I think sometimes it might be nice if people could just be allowed to be…different. At least for a little while. Without an explanation. Especially kids. I’m not really super fond of the term “normal”.

Were you aware of the powers of bicarbonate of soda before beginning to write about Britt-Marie, if not how did you find out about it? Hunstanworth Village Book Group

Yes. My grandmother taught me that. The woman can clean anything. She would be the BEST serial killer. The police wouldn’t find a trace, I can tell you that right now. Come to think of it: She might actually be a serial killer. We would never know. Until we made her mad.

Which football team do you support and what does this say about you? Hunstanworth Village Book Group

Manchester United. That’s why the least likeable person in the book supports them. I thought that would be fair. Manchester United was extremely good for a long time, and that makes fans spoiled. You start to expect constant success. You start to think you’ve earned it. But that’s what’s great about sports, sooner or later it will always make you humble again.

Read our reading groups’ reviews of Britt-Marie Was Here and leave your own.

Join Reading Groups for Everyone and get your reading group involved in our books community!