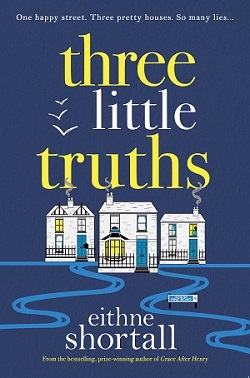 The next book to be featured on the Jo Whiley Radio 2 Book Club will be Three Little Truths, the brilliant new novel by Eithne Shortall. It was released on 3 October and Eithne will be on the show on Monday 7 October.

We have the chance for you to win 10 copies of this fantastic novel for your reading group! Please enter by Friday 18 October.

Martha used to be a force of nature: calm, collected, and in charge. But since moving her husband and two daughters to Dublin under sudden and mysterious circumstances, she can’t seem to find her footing.

Robin was the ‘it’ girl in school, destined for success. Now she’s back at her parents’ with her four-year-old son, vowing that her ne’er-do-well ex is out of the picture for good.

Edie has everything she could want, apart from a baby, and the acceptance of her new neighbours. She longs to be one of the girls, and to figure out why her perfect husband seems to be avoiding their perfect future.

Three women looking for a fresh start on idyllic Pine Road. Their friendship will change their lives, and reveal secrets they never imagined…

The book was selected with the help of a panel of library staff from across the UK. Our readers loved Three Little Truths – here are some of their comments:

“I enjoyed this a lot – the characters were well drawn and engaging and the author tackles the detail of their lives with real affection. Essentially the book focuses on three women who live on Pine Road, from newcomer Martha who is fleeing something nasty, and returning daughter Robin with her marriage breakdown to desperate Edie with her baby plans – but actually there are a host of other characters that loom large in the book, you can’t miss Bernie Watters-Reilly and her sidekick Ellen who basically run everything in the local community. There are also the comic turns like the chap down the end and his crazy ways to prevent residents parking on his land. A different author and this would have turned into Midsomer Murders but Shortall keeps the petty resentments simmering and manages to show real friendships being forged between the women. The exchanges on the Pine Road What’s App group intersperse the main story so you can see the characters seemingly reacting in real time and actually a lot of this rang true. Those groups that you feel you need to be in to be polite and the people you don’t like that much but must not upset as they are neighbours or a friend of a friend. This is a gentle read with a surprising amount of comedy. It’s a real close study of how society works in microcosm.”

“The lives and secrets of three women become entangled when one of them moves into the tight-knit community of their seemingly idyllic street. I enjoyed this read more as it progressed. There is quite a bit of humour and the characters are engaging enough to hold the reader’s interest. Despite the clues I didn’t work out the significant connection between Martha and one of the other characters and the novel was properly wrapped up at the end. A light, enjoyable read.”

“This is a story set in Ireland. The focus is the women of the street who are all part of a What’s App group. The characters are well described and although believable, are larger than life. The story was a little slow to get going, but once it was rolling the author pulls all the strings together and everyone’s lives are interlinked. The story ends with the craziest street party, which goes disastrously wrong. It is humorous in a pantomime style and does make you laugh. The aftermath of the street party sees the key strands of the story revealed.” 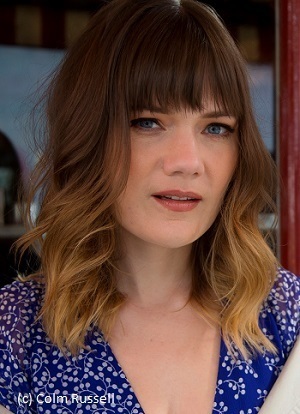 Eithne was born and grew up in Dublin, Ireland. She studied journalism at Dublin City University and spent four months living in West Virginia. She lived in Paris for a year in her early twenties and vaguely thought about writing. She went to London to write her first novel, Love in Row 27, which is set there. Her follow-up, Grace after Henry, is set in – and is partly a love letter to – Dublin, where she now lives. Three Little Truths is inspired by the Dublin cul-de-sac on which Eithne grew up – though her mother wishes she’d stop telling people this.

Eithne is an avid cyclist, voracious reader, eater of sweets and lover of radio. Her Mastermind topic would be the life of Lucia Joyce, twentieth century Irish visual art, 1980s teen movies or Dawson’s Creek. It depends on the day.

A word from Eithne

“I’m not exaggerating when I say being chosen for the BBC Radio 2 Book Club is a serious career highlight. I’m delighted. I’m particularly chuffed at the role libraries and librarians play in this. I wrote my debut novel in a library during a three-month period I spent living in London (shout out to Hornsey library in Crouch End!). Without that free, accessible space I doubt if I ever would have gotten the thing finished, or indeed if I’d be where I am today. I owe libraries my career, really – and this is just the cherry on the cake.”

Tune in to Jo Whiley’s show on Monday 7 October to hear a live interview with Eithne.

Planning to buy Three Little Truths for your reading group? Buy books from Hive and support The Reading Agency and local bookshops at no extra cost to you.