Radio 2 Book Club - The Photographer of the Lost 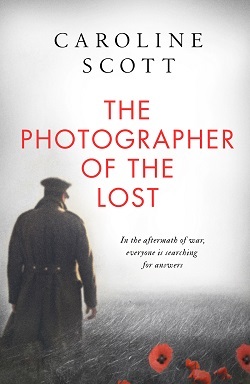 The next book to be featured on the Jo Whiley Radio 2 Book Club will be The Photographer of the Lost, the powerful historical novel from Caroline Scott. It was released on 31 October and Caroline will be on the show on Monday 16 December.

We have an exclusive extract available for you to read as well as some discussion questions for your reading group.

We also have the chance for you to win 10 copies of this fantastic novel for your reading group! Please enter by Friday 20 December.

The book was selected with the help of a panel of library staff from across the UK. Our readers loved The Photographer of the Lost – here are some of their comments:

“I loved how Scott structured the novel, alternating between Edie and Harry. It allowed Scott to show their own unique perspectives. I was prepared for the psychological impact the war had on Harry and Edie but not the visual intensity of Scott’s narrative. Her descriptions of the bombed out French villages was incredible and not something we often read about. The tumbled down churches, the houses with household objects still visible after three years was so vividly described. You admired the resilience of the inhabitants who returned to their homes determined to rebuild. What made this novel stand out from all the others was its unique perspective of the families who wanted photographs of the place their sons had fallen. It was at times incredibly moving and poignant and something I had little knowledge of. It was absolutely fascinating and I would have no hesitation in recommending it.”

“The aftermath of war – how can you move on with your life when your husband’s reported missing in action? When you’re the only surviving brother of three? When you love your brother’s widow? When memories of what you’ve experienced keep coming back to you? Edie’s husband Francis is reported missing in action, then four years later Edie gets sent a photo of him standing in a French village. Is he still alive? Harry (Francis’ brother) tours around the war zones taking pictures commissioned by grieving families. Everywhere he goes he’s looking for evidence that Francis might still be alive. As he travels, flashes of war experiences in these places come back to him. These events are described so vividly that you’re there with the men in the trenches coping with the awful mud, the noise and the fear. There’s a lot of really funny trench humour, and the camaraderie of the brothers to lighten what could have been a gloomy book. This is a beautifully written book, very easy to read and really thought provoking.”

“A gentle and moving story of dealing with the trauma of conflict and the loss of loved ones without knowing what has happened to them. Emotional and moving. A good book for discussion.” 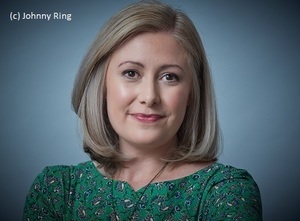 Caroline completed a PhD in History at the University of Durham. She developed a particular interest in the impact of the First World War on the landscape of Belgium and France, and in the experience of women during the conflict – fascinations that she was able to pursue while she spent several years working as a researcher for a Belgian company. Caroline is originally from Lancashire, but now lives in southwest France.

A word from Caroline

“I was thrilled, and somewhat astonished, to hear that The Photographer of the Lost had been chosen for the BBC Radio 2 Book Club. As I’m new to fiction, this feels like a kindly hand reaching out to help me up, and I’m so grateful for that.

It’s particularly heartening to know that my book was selected by librarians. Until I left home for university, my mum and I would go to Rochdale library every week. It had an excellent history section, particularly strong on the First World War, and the pages of those books triggered a life-long passion in me. I firmly believe that having access to a good library and inspiring books can change your life, and I wanted to acknowledge and celebrate that in my own writing. It’s no accident that the main characters in The Photographer of the Lost first see each other through library shelves – and that they make judgements about each other based on their reading matter!

I’m a member of a book club myself, and there’s something really special about sharing a read, and having a group with whom you can candidly express your responses. When we all have strong feelings about a book (good or bad), we have the most brilliant meetings. If I’m honest, it’s a little scary to think of my own story being discussed around dining-room tables, but I hope that readers will find personal connections there, and that it will stimulate interesting conversations and questions. Thank you for choosing to read The Photographer of the Lost.”

Tune in to Jo Whiley’s show on Monday 16 December to hear a live interview with Caroline.

Planning to buy The Photographer of the Lost for your book group? Buy books from Hive and support The Reading Agency and local bookshops at no extra cost to you.