Radio 2 Book Club - The Devil and the Dark Water 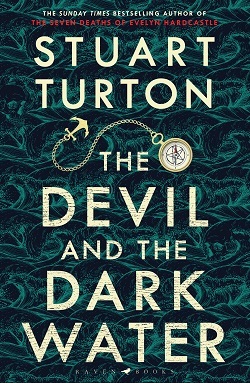 The next book to be featured on the Jo Whiley Radio 2 Book Club will be The Devil and the Dark Water, by bestselling author Stuart Turton. The book is released on Thursday 1 October and Stuart will be on the show on Monday 5 October.

We have the chance for you to win 10 copies of this fantastic novel for your reading group! Please enter by Friday 9 October.

The Devil and the Dark Water

With Pipps imprisoned, only Arent and Sara can solve a mystery that stretches back into their past and now threatens to sink the ship, killing everybody on board.

The book was selected with the help of a panel of library staff from across the UK. Our readers loved The Devil and the Dark Water – here are some of their comments:

“I am struggling to find much else to say about The Devil and The Dark Water other than that it is utterly brilliant. Turton constructs an astonishingly ambitious plot – a Holmesian figure, silenced in his imprisonment; a demon threatening to possess the ship that transports him back to face his trial; and his local bodyguard, Hayes, determined to prove his friend innocent – and delivers it to us through exceptional narration. His prose is controlled and nuanced, creating subtle changes in perspective and giving time to each of his huge cast of characters. Turton creates images that are almost cinematic: moving us through the ship, into darkened spaces that harbour secret altars, or, into the cabins that house the private discussions of the nobles on board. It is long; at almost 550 pages, it takes time to read but it requires this length to develop the nuances in the plot. Indeed, I felt this length gives Turton the space to spin his elaborate tale, and then the space for us to see it unravel before our eyes. I have added Turton’s debut novel – The Seven Deaths of Evelyn Hardcastle – to my reading list, hoping for the same exquisite storytelling and intricacies of plot, because I loved this novel so much.”

“This was a very enjoyable read, it moved along at a cracking pace, with a good balance of dialogue and description. There was enough period detail to convey the atmosphere of a 17th century trading ship, and I wanted immediately to know more about the characters. I found it an enjoyable and original romp, which I am happy to have read.”

“Well-written fast-paced period thriller. Set in 1634, Samuel Pipps, the world’s greatest detective is being transported to Amsterdam as prisoner of the Dutch East India Company to be executed for a crime he’s unaware of. His bodyguard Arent Hayes spends the journey determined to prove his innocence. The story weaves in ancient beliefs of devilry, curses, the fights and frictions between nobles and peasants, the strength of friendship, family ties and the brutalities of a sea-faring life. How much is an individual prepared to sacrifice in order to achieve their ultimate goal? Recommended reading for a bit of period mystery escapism.” 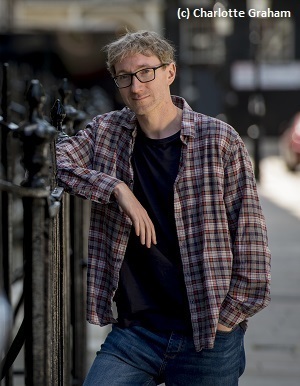 Stuart Turton’s debut novel, The Seven Deaths of Evelyn Hardcastle, won the 2018 Costa First Novel Award and the Books Are My Bag Readers Award for Best Novel, and was shortlisted for the Specsavers National Book Awards and the British Book Awards Debut of the Year.

A Sunday Times bestseller for three weeks, it has been translated into thirty languages and has also been a bestseller in Italy, Russia and Poland. Stuart lives near London with his wife and daughter.

A word from Stuart

“I’m so bloody happy The Devil and the Dark Water was chosen for the Radio 2 Book Club. I’ll make no qualms about it, I write mysteries because I want to entertain readers, and I take immense satisfaction when people enjoy them. I love hearing everybody’s theories on who the killer is, and why. I love hearing about the characters they liked and hated. I love chatting with people about writing. I love book people, basically.

Because of the pandemic, I won’t be getting out to the festivals, libraries, bookshops, and book groups the way I normally would, so I was over the moon when I heard Radio 2 would be doing it for me instead. Growing up, I was in the library twice a week, and I’d always carry home two or three books our librarian recommended. The idea that one of my books is now that recommendation thrills me in a way it’s impossible to describe.”

Tune in to Jo Whiley’s show on Monday 5 October to hear a live interview with Stuart.

Have you read The Devil and the Dark Water? You can share your thoughts with us on Twitter using #R2BookClub.

Planning to buy The Devil and the Dark Water for your group? Buy books from Hive and support The Reading Agency and local bookshops at no extra cost to you.