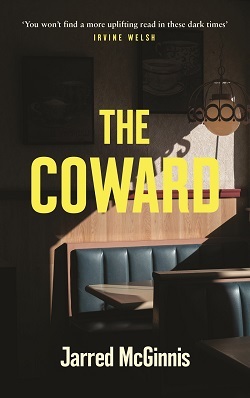 The next book to be featured on the Radio 2 Book Club with Steve Wright will be The Coward, the brilliant debut novel by Jarred McGinnis. The book was released on 1 July and Jarred will be on the show on Thursday 12 August.

After a car accident Jarred discovers he’ll never walk again. Confined to a ‘giant roller-skate’, he finds himself with neither money nor job. Worst of all, he’s forced to live back home with the father he hasn’t spoken to in ten years.

Add in a shoplifting habit, a painkiller addiction and the fact that total strangers now treat him like he’s an idiot, it’s a recipe for self-destruction. How can he stop himself careering out of control?

As he tries to piece his life together again, he looks back over his past – the tragedy that blasted his family apart, why he ran away, the damage he’s caused himself and others – and starts to wonder whether, maybe, things don’t always have to stay broken after all.

The Coward is about hurt and forgiveness. It’s about how the world treats disabled people. And it’s about how we write and rewrite the stories we tell ourselves.

The book was selected with the help of a panel of library staff from across the UK. Our readers loved The Coward – here are some of their comments:

“I absolutely loved this – a family drama which hooks you in right from the start. It’s at turns heart-breaking and humorous and there’s lots for a book club to talk about, including family breakdowns, alcoholism, grief, and societal attitudes to disability. I don’t think I’ve read anything like it before.”

“Jarred is not instantly likeable but he does have a dry wit and you are rooting for him as he seeks closure and acceptance of his circumstances. I have never read a book with a wheelchair based main character and it certainly made me think more about disability. I would love to know which bits are autobiographical and which are artistic licence. It explored father-son bond and the choices people make and that you can build even the more broken relationships back together.”

“This is a gripping novel written in the first person by a hero who is deeply troubled and flawed. After a difficult childhood made worse by the early death of his mother, he disappears from the family home until 10 years later he is severely disabled in an accident. He has to return home to live with his ageing father and struggle with his changed life as semi-paralysed in a wheel chair. Although the reader becomes well aware of how obnoxious the narrator can be, it is still possible to feel interested in his life especially the tentative reconstruction of the father-son relationship. The story flips between the narrator’s past leading up to the accident and his life after the accident. The difficulties of life as a wheelchair user and the attitudes of those around him are vividly portrayed. The author appears to be on a mission to assert the rights of the disabled to be unsaintly and not always inspirational to the able-bodied world. The book made me feel engaged and wanting other people to read it as well. I felt I had read an important work by an author burning to get his view across.”

“This is one of the most powerful novels I can remember reading in years – uncomfortable at times, and strangely humorous at others, I found myself drawn to Jarred and his story, and felt very privileged to have been allowed such an intimate look into someone else’s experience. I would recommend this book to everyone.”

Jarred McGinnis is the co-founder of The Special Relationship, which was chosen for the British Council’s International Literature Showcase. His short fiction has been commissioned for BBC Radio 4 and appeared in literary journals in the UK, Canada, USA and Ireland. He is an Associate Writer for Spread the Word, a fellow of the London Library’s Emerging Writer Programme and a Writer-in-Residence for First Story. He also has a PhD in Artificial Intelligence, but mostly he inspires the able-bodied by using public transport and taking his daughters to the playground.

A word from Jarred 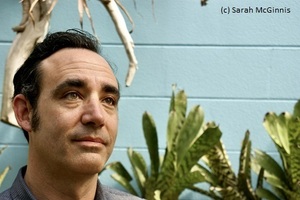 “When I first moved to the UK, I arrived in Edinburgh from Texas and my thin Southerner’s blood was unprepared for my first Scottish winter. I survived because I had a radio and a library card. I remember a particular librarian, appalled by my lack of knowledge of British literature, prescribed classics and contemporary to address my deficiency. Our discussions across the counter are still dear to my heart and I see the heritage of her reading list in my own prose and my debut novel The Coward.

To have my first novel chosen for the Radio 2 Book Club and to know there will be reading groups around the UK discussing a book I wrote is far beyond a pleasure and an honour. That young man in a double-layer of thermals, leaning against the radiator and reading Hardy, would never believe the things we’ve seen and done since that first winter. Thank you and I hope you like The Coward".

Tune in to the Steve Wright show on Thursday 12 August to hear a live interview with Jarred.

Planning to buy The Coward for your group? Buy books from Hive or from Bookshop.org and support The Reading Agency and local bookshops at no extra cost to you.