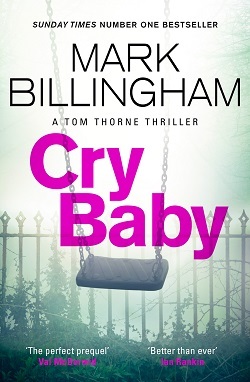 The next book to be featured on the Jo Whiley Radio 2 Book Club will be Cry Baby, the prequel novel to Sleepyhead, the massively influential debut novel from Mark Billingham. The book will be released on Thursday 23 July, and Mark will be on the show on Monday 27 July.

It’s 1996. Detective Sergeant Tom Thorne is a haunted man. Haunted by the moment he ignored his instinct about a suspect, by the horrific crime that followed and by the memories that come day and night, in sunshine and shadow.

So, when seven-year-old Kieron Coyne goes missing while playing in the woods with his best friend, Thorne vows he will not make the same mistake again. Cannot.

The solitary witness. The strange neighbour. The friendly teacher. All are in Thorne’s sights.
This case will be the making of him…or the breaking.

The gripping prequel to Mark Billingham’s acclaimed debut, Sleepyhead, Cry Baby is the shocking first case for one of British crime fiction’s most iconic detectives.

The book was selected with the help of a panel of library staff from across the UK. Our readers loved Cry Baby – here are some of their comments:

“This is a prequel to Mark Billingham’s best-selling debut, Sleepyhead. It features Detective Sergeant Tom Thorne and is set against the backdrop of the 1996 European Cup championships. Thorne is newly separated from his wife and haunted by a case ten years earlier in which, mistrustful of his own intuition, he failed to apprehend a serial killer before he murdered his entire family. The ‘Johnny Boy’ killings are now the stuff of police legend and taunts about his so-called ability to look in people’s eyes and know their guilt fuels Thorne’s worst nightmares. So, when seven-year-old Keiron Coyne goes missing in the park while playing with his best friend, this past case is dragged to the forefront of his thoughts. Thorne is a well-developed central character and the plot is cleverly paced and constructed. The two children who drive the plot, Keiron and his best friend Josh, are also developed carefully which itself is an accomplishment. Plenty of discussion for reading groups as Billingham also touches on issues that surround what would have been socially marginalised groups at the time. And the subject of prequels, sequels and recurring main characters like Thorne, who must carry a series, is also an interesting one to debate.”

“I know I must live in an alternate universe but, although I knew a lot about him, I had never read any of Billingham’s previous novels, despite being a fan of the crime genre. I was a little concerned that I might not be in the know about the characters and the London policing scene he has been writing about for 20 years but you just join the story and the characters in a moment of time and are immediately drawn in. After a brief look into the psyche of Tom Thorne the main plotline of the book begins with the abduction of a child from a London park and the effect this has on his family, the woman who was watching out for him, and the friend he was playing with at the time. The story is gripping, as you would expect from an experienced crime novelist, raising questions about the parentage of the missing boy, the motivations of the various characters involved (families, witnesses, suspects, the police team themselves) whilst also looking at Thorne’s personal life.”

“I enjoyed the story line and the mystery elements, which kept the novel gripping right until the end. And I found the time period engaging…recent past but also seemingly years away in terms of technology. A good, pacey read, with a good ending, and an endearing key character.” 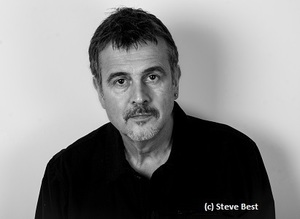 Mark Billingham has twice won the Theakston’s Old Peculier Award for Crime Novel of the Year, and has also won a Sherlock Award for the Best Detective created by a British writer. Each of the novels featuring Detective Inspector Tom Thorne has been a Sunday Times bestseller. Cry Baby is a prequel set 20 years before the events in Sleepyhead, making it a perfect book for both fans and new readers.

Mark lives in north London with his wife and two children.

Tune in to Jo Whiley’s show on Monday 27 July to hear a live interview with Mark.

Have you read Cry Baby? Leave a review or see what other readers thought of the book.

Planning to buy Cry Baby for your group? Buy books from Hive and support The Reading Agency and local bookshops at no extra cost to you.