Find out about the new novel from international and Sunday Times bestselling author, Christy Lefteri 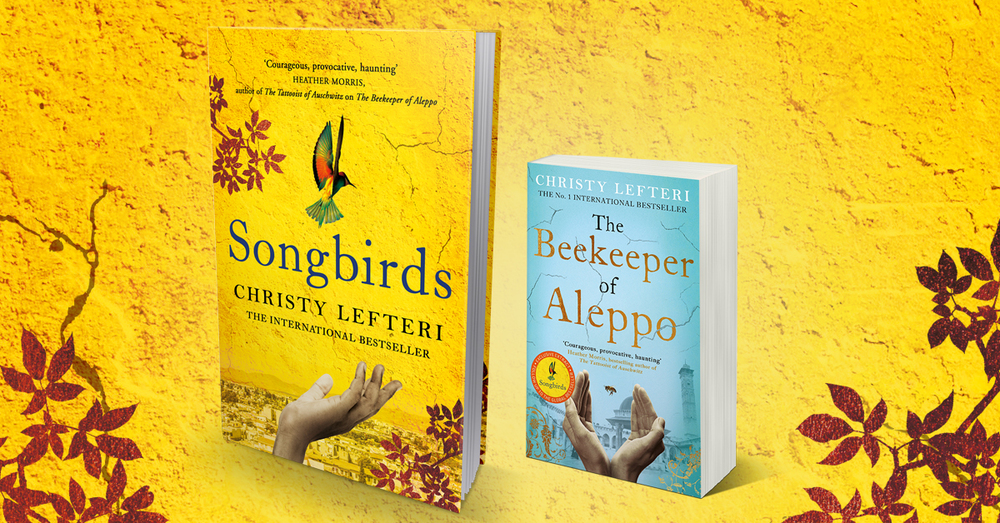 The Beekeeper of Aleppo has now sold over a million copies worldwide. How have you felt seeing its success of unfold over the past two years?

It’s honestly felt extraordinary, in every sense of the word, to see the success of The Beekeeper of Aleppo unfold these past two years. While I was writing it, I never dreamed that it would touch so many hearts. In fact, trying to imagine so many people at one time or another holding Beekeeper in their hands, or listening on audio, is sort of mind-blowing. Looking back now at the volunteer work I did in Athens, at the children and families I met – all those people that I will never forget – I feel gratitude that so many readers worldwide were interested in learning more about the experience of one fictional family and hopefully opening their hearts to the real refugee families of this world. I’m so pleased that so many book groups chose to read it and took so much time and care discussing the themes that the story raised. Often I’m in tears at the messages I receive on social media in relation to refugees.

Your new novel, Songbirds, follows the story of a migrant worker, Nisha. Why was it important to you to write about the experience of migrants?

While I was on tour for The Beekeeper of Aleppo I was often asked a very important question which got me thinking. “How can we get people to understand that refugees are not like migrants, that they have no choice?” While I was working at the volunteer centre in Athens, there were many refugees there from Afghanistan. They were considered by the government at the time to be migrants and not refugees and therefore received no help. When I went back the following year, I found that many of the Syrian families had moved on, but the families from Afghanistan were still stuck in the camps. But I digress from the question a little, because what really saddened me about the question was our obvious need to categorise, label and put people into boxes. I knew from the stories that I had heard that people make journeys for all sorts of reasons. Sometimes they are frightened, sometimes they have no other choice, but sometimes they are searching for a better life. Can we condemn people for wanting a better life? Don’t we all? What does wanting a better life mean to one person and another? It was these thoughts and these questions which compelled me to want explore further and eventually to write about migrants.

The image of Nisha mothering her own daughter through an ipad while caring for someone else’s child is absolutely heartbreaking. Was Nisha inspired by anyone in your own life?

I used to stay with a family member who hired a domestic worker from Sri-Lanka named Menaka. Menaka and I became friends over the years, she was such a strong and beautiful woman. We spoke about our lives – I was going through a divorce at the time and she was lovely and really supportive. At the same time, she told me so much about her life too. I discovered that she had made a huge sacrifice for her family. She told me how her husband, the love of her life, died in a farming accident. No matter how much she worked she could not make enough money to raise her two daughters. She made the extremely difficult decision to go to Cyprus in order to be able to send money back home. She wanted her daughters to have a secure life and to be educated. She had not seen her daughters for eight years because she could not afford to return home. She would speak to them on the tablet every day, she was a mother to them through a screen. I would listen to Menaka talking to her daughters through the tablet and I could see the immense love she had for them, how she tried everything she could to maintain their bond, to give them all the care that she could from afar while they lived with their grandmother. Menaka told me so much about Sri-Lanka, about the town she was from, the food and culture, nature and customs. I think it was because of my friendship with Menaka that I wanted to write this novel so much.

Both The Beekeeper of Aleppo and Songbirds have incredibly strong parent-child bonds at their heart. How important is family in your writing?

Yes, family is very important. No matter what story I’m writing, whatever the circumstances are, it is the bond and the love between people, between friends, between a parent and child, a husband and a wife, that is the real heart of the story.

What message would you like readers to take from Songbirds?

Maybe this sounds a bit idealistic – but to respect every single human being and every single animal as we do ourselves.

What would you like to say to all the readers who have supported you over the past few years?