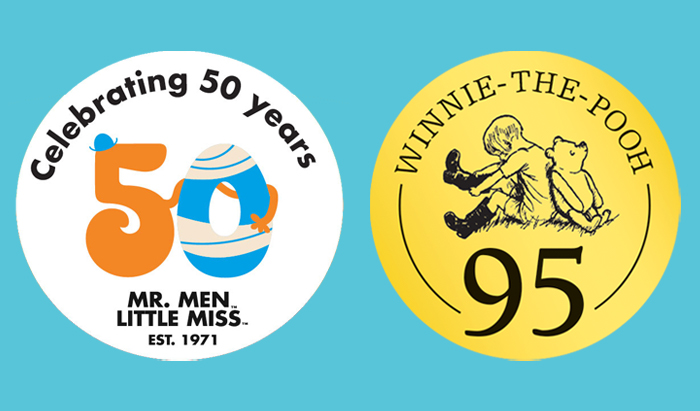 Join in on Farshore’s unmissable anniversary celebrations for two of the best loved and most celebrated children’s brands, marking 50 years of the Mr. Men Little Miss and 95 years of Winnie-the-Pooh.

This timeless story collection is a real tribute to the world’s most famous bear and the perfect opportunity for everyone to revisit these favourite friends and find out how they become the larger than life characters that we all know and love.

In 1971, Mr Tickle was published, bringing fun, tickles, and laughter to households everywhere. Now, 50 years later, the iconic Mr. Men Little Miss have continued to delight children for generations with their charming and funny antics. To celebrate 50 years of stories, for the very first time, we asked the general public to vote for which two characters should be introduced to the series. In a special channel 4 documentary hosted by Matt Lucas, the winners were revealed to be Mr. Calm and Little Miss Brave – beating three other characters to be the nation’s favourite – who now feature in their very own books.

And to celebrate the anniversary year in style, we’ve released a brand-new edition of Mr. Tickle – the very first Mr. Men character. This new edition is in a bigger picture book format, features a shiny gold cover and has a bonus story inside that tells readers all about how the beloved Mr. Men Little Miss were first created.

To celebrate the release of the Official Winnie-the-Pooh 95th Anniversary Prequel and the Mr. Men Little Miss special 50th anniversary publishing, Farshore are offering a set of digital resources for libraries and schools.

You can download the digital resources from this Google Drive.