Home / Resources / The End of the World Runnin... 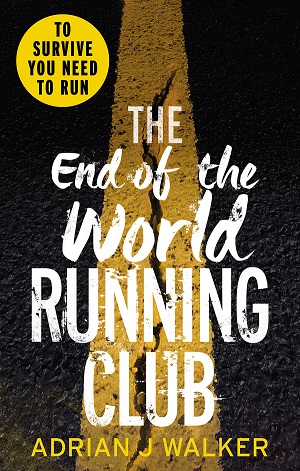 Edgar Hill is 35 and caught in his own headlock. Overweight slob, under-performing husband and reluctant father – for Ed, the world may as well have already ended.

So when it does end in a catastrophic asteroid strike and Edgar and his family find refuge in an Edinburgh army barracks, it comes as something of a relief. His world becomes simpler, life becomes easier, things might just be looking up.

But nothing’s ever that simple. Returning from a salvage run in the city, Edgar finds his family gone, taken to the south coast for evacuation by an international task force. Suddenly he finds himself facing a gruelling journey on foot across a devastated United Kingdom. Accompanied by a group of misfits that include a large, hairy tattoo artist and an old man who claims to have run around Australia, Edgar must race against time and overcome his own short-comings, not to mention 100 mile canyons and a very strange council estate, to find the people he loves before he loses them forever.

A vivid, gripping story of hope, long-distance running and how we break the limits of our own endurance.

Download the discussion questions about The End of the World Running Club and remember to comment in our Book reviews section.