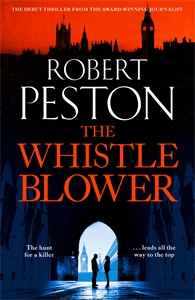 Would you like the opportunity to read and review Robert Peston’s debut thriller, The Whistleblower?

1997. A desperate government clings to power; a hungry opposition will do anything to win. And journalist Gil Peck watches from the sidelines, a respected commentator on the sport of power politics. He thinks he knows how things work. He thinks he knows the rules.

But when Gil’s estranged sister Clare dies in a hit-and-run, he begins to believe it was no accident. Clare knew some of the most sensitive secrets in government. One of them might have got her killed.

As election day approaches, Gil follows the story into the dark web of interests that link politics, finance and the media. And the deeper he goes, the more he realises how wrong he has been.

Power isn’t sport: it’s war. And if Gil doesn’t stop digging, he might be the next casualty.

‘Brilliant. Politically insightful, scary, satirical, beautifully paced and has a great cast of characters led by its narrator, Gil Peck’ – THE TIMES

’There’s a winning energy as the action zips around between the different elite milieux, and Gil – plainly the young(ish) Peston – is a fascinating mix of self-criticism and self-congratulation’ – SUNDAY TIMES

‘This enjoyable, intelligent thriller will be catnip for news junkies’ – GUARDIAN

‘[A] cracking debut. This is House of Cards country, with double-dealing seen as a way of life . . . His dark view of the Westminster jungle is hugely refreshing’ – DAILY MAIL

‘A rollicking read . . . His portrayal of 1990’s London is fun and dripping with drink, drugs, private members clubs and an eye for designer clothes, while news junkies and political addicts will enjoy trying to put the real names to some of the characters’ – EVENING STANDARD

‘A cracking read . . . Peston’s portrayal of champagne-fuelled 1990s London is vivid and lifelike . . . His enthralling debut thriller takes us right into the heart of a fictional government machine and media circus.’ – FINANCIAL TIMES

‘Secrets, spies, sex, betrayals, murder and a scandal that leads all the way to the top of British politics . . . A gripping read’ – RADIO TIMES

‘This compelling story includes characters drawn from major players in politics and the media. Peston has dug deep into his experiences for this tale of power, money, sex and dodgy dealings’ – THE SUN, Pick of the Week

‘Wicked fun . . . Remarkably vivid in his descriptions of London in the 1990s, evoking the time and many of the places within the corridors of power with flinching accuracy’ – CRIMETIME