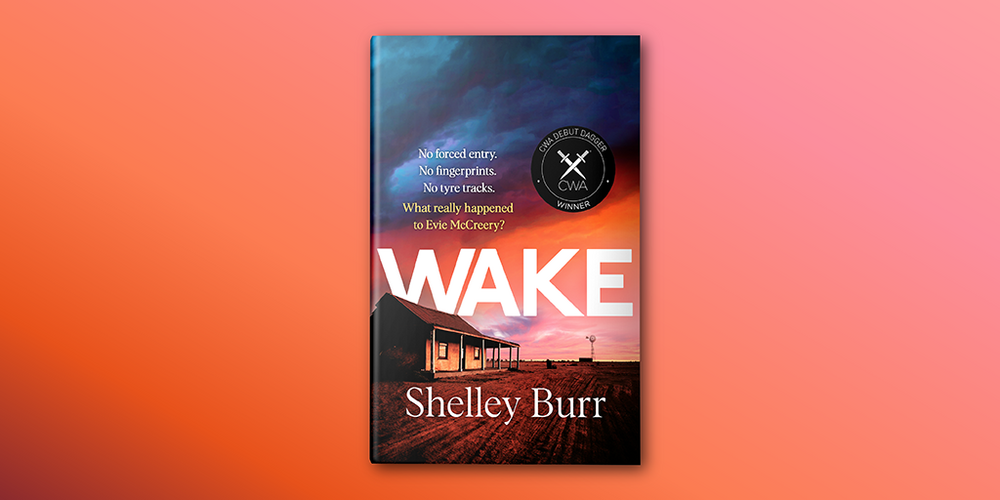 Shelley Burr is the winner of the CWA Debut Dagger award with her first novel, Wake, She lives in Australia, where her father’s family are all sheep farmers. Read on to find out about this exciting prize-winning debut.

I went through a period of reading online forums dedicated to unsolved murders – one of those brief but intense obsessions that the internet pulls you into. There are some lovely, compassionate people on those forums who have achieved remarkable things – solving cold cases, raising money for DNA testing on Jane Does, highlighting forgotten victims.

But over time, I became uneasy about the way users would talk about the friends and families of victims. These people didn’t seek out public attention, but they had complete strangers digging into any information they could find about them. It’s easy, in the echo chamber of online spaces, to lose perspective on what you’re doing. I imagined how angry I would be in their position, and that rage became Mina.

The story flowed from Mina. Her character changed very little from the original idea to the final draft, but it took me a long time to understand her. Mina is angry, and anxious, and completely uninterested in being liked by anybody. Why? Because her sister disappeared, and she has lived her whole life in the shadow of that loss, and the intense international attention the case received.

I knew right away that I wanted the setting to be somewhere remote. I had an image of a farmhouse surrounded by paddocks, like a ship on the ocean. Somewhere that people would assume they were safe, where someone simply disappearing seemed impossible. WAKE is set in Nannine, which is a fictional town in central New South Wales. (I did borrow the name from a ghost town).

I didn’t want to use a real town for the setting, as it felt unfair to impose fictional crimes on a real place. But there is a real town that I used to check things like, would Nannine have a school? A doctor? Who would you call in an emergency? How long would it take to drive to various cities?

When I was growing up my paternal grandparents had a farm, as did a lot of their siblings. I spent so many hours wandering empty paddocks and exploring shearing sheds. Being so remote affects everything – you need to plan out your supplies carefully when trips to town take hours. You’re very aware of how far from help you are if anything goes wrong. I wanted to capture some of that feeling, but also the beauty and expansiveness of the landscape.

The last piece was my investigator, Lane Holland. Mina’s an immoveable object, so I needed an unstoppable force to collide with her. I read about a particular type of private investigator—those who aren’t hired, but go after cases with rewards for information. Most are older, often retired police officers. But I was drawn to the idea of someone younger, more desperate. Why would someone with the skills to solve crimes choose that line of work, instead of a secure career with the police?

If you’d like to win copies of the book for your reading group, please head to our Noticeboard