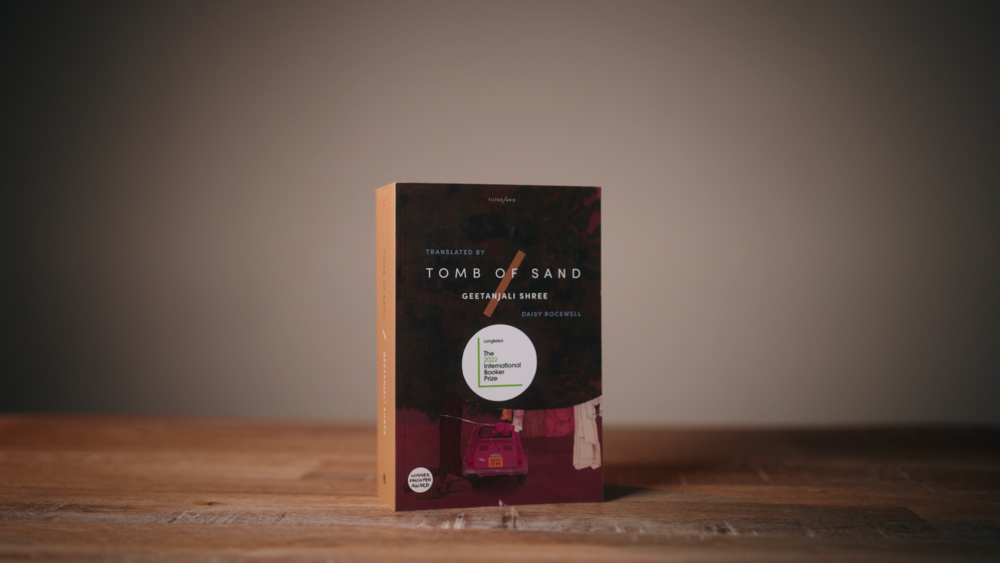 Tomb of Sand, written by Geetanjali Shree and translated from Hindi by Daisy Rockwell, has been announced at the winner of the 2022 International Booker Prize.

Tomb of Sand is set in northern India, and follows an 80-year-old woman who slips into a deep depression at the death of her husband, then resurfaces to gain a new lease on life. Her determination to fly in the face of convention – including striking up a friendship with a hijra person – confuses her bohemian daughter, who is used to thinking of herself as the more ‘modern’ of the two.

To her family’s consternation, Ma insists on travelling to Pakistan, simultaneously confronting the unresolved trauma of her teenage experiences of Partition, and re-evaluating what it means to be a mother, a daughter, a woman, a feminist.

Rather than respond to tragedy with seriousness, Geetanjali Shree’s playful tone and exuberant wordplay results in a book that is engaging, funny and utterly original, at the same time as being an urgent and timely protest against the destructive impact of borders and boundaries, whether between religions, countries, or genders.

Originally published in Hindi in 2018, Tomb of Sand is the first book originally written in any Indian language to win the prize, and the first novel translated from Hindi to be recognised. In 2019, it was awarded one of English PEN’s converted translation awards, which encourages UK publishers to acquire more books from other languages by helping them to meet the costs of translating new works into English. It was published in English by Tilted Axis Press in August 2021.

The author of three novels and several story collections, Geetanjali Shree has been translated into English, French, German, Serbian, and Korean. She was born in Mainpuri, India, in 1957. This is the first of her books to be published in the UK. She has received and been shortlisted for a number of awards and fellowships, and lives in New Delhi.

Daisy Rockwell is a painter, writer and translator living in Vermont, US. She was born in 1969 in Massachusetts. She has translated a number of classic works of Hindi and Urdu literature, including Upendranath Ashk’s Falling Walls, Bhisham Sahni’s Tamas, and Khadija Mastur’s The Women’s Courtyard. Her 2019 translation of Krishna Sobti’s A Gujarat Here, a Gujarat There was awarded the Modern Language Association’s Aldo and Jeanne Scaglione Translation Prize.

Tomb of Sand was chosen from a shortlist of six books during a lengthy and rigorous judging process, by a panel of five judges, chaired by translator, Frank Wynne. The panel also included author and academic, Merve Emre; writer and lawyer, Petina Gappah; writer, comedian and TV, radio and podcast presenter, Viv Groskop; and translator and author, Jeremy Tiang. This is the first time a translator has chaired the panel.

“This has been an exceptionally strong shortlist, and it was gradually, regretfully, that we winnowed these six down to one after a long and impassioned debate. Ultimately, we were captivated by the power, the poignancy and the playfulness of Tomb of Sand, Geetanjali Shree’s polyphonic novel of identity and belonging, in Daisy Rockwell’s exuberant, coruscating translation. This is a luminous novel of India and partition, but one whose spellbinding brio and fierce compassion weaves youth and age, male and female, family and nation into a kaleidoscopic whole.”

Geetanjali Shree and Daisy Rockwell will be appearing at Hay Festival on 29 May. In their first public event since the announcement, the pair will be in conversation with Viv Groskop. More information is available on Hay Festival’s website.

Order your digital promotion pack and bookmarks to promote the Prize and winning book in your library.

Six Reading Groups have shadowed the 2022 International Booker Prize shortlist and we will soon be sharing their reviews on the titles that made it to the list.

Take a look at the longlist and shortlist for more recommendations.