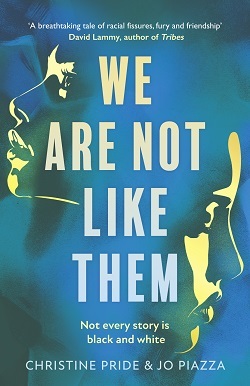 The next book to be featured on the Radio 2 Book Club with Steve Wright will be We Are Not Like Them, the powerful novel co-authored by Christine Pride and Jo Piazza. The book was released on 14 October and Christine and Jo will be on the show with Steve on Wednesday 15 December.

We have an exclusive extract for you to read.

Not every story is black and white.

Riley and Jen have been best friends since they were children, and they thought their bond was unbreakable. It never mattered to them that Riley is black and Jen is white. And then Jen’s husband, a Philadelphia police officer, is involved in the shooting of an unarmed black teenager and everything changes in an instant.

This one act could destroy more than just Riley and Jen’s friendship. As their community takes sides, so must Jen and Riley, and for the first time in their lives the lifelong friends find themselves on opposing sides.

We Are Not Like Them is about friendship and love. It’s about prejudice and betrayal. It’s about standing up for what you believe in, no matter the cost.

The book was selected with the help of a panel of library staff from across the UK. Our readers loved _We Are Not Like Them – here are some of their comments:

“This is a powerful and timely novel, which hooks you in from the outset and doesn’t let go. I think the real selling point of the book is the idea of having the two perspectives told by two different authors. I think the book handles this well – it felt like two halves of a whole rather than two different stories alternating. The book manages to get its message across without becoming overly sermonizing – perspectives are presented and the reader given space to think. I could easily see this being turned into a film or TV series.”

“Told from alternating perspectives, the novel starts from a perspective from a Black teenager in America who has been shot by police and it’s so powerful that I was instantly sucked into wanting to find out more and hoping he’d be okay. Then we are introduced to Jen and Riley, one Black and one white, whose lifetime friendship is indelibly altered by this tragic event. It’s a tense and emotional story as their deep bond is severely tested when Jen’s husband, a city police officer, is involved in the shooting of an unarmed Black teenager. Six months pregnant, Jen is in freefall as her future, her husband’s freedom, and her friendship with Riley are thrown into uncertainty. Covering this career-making story, Riley wrestles with the implications of this tragic incident for her Black community, her ambitions, and her relationship with her lifelong friend. This book had me angry, sad, joyful and sad again and really made me think about white privilege. It makes for uncomfortable reading in places but I also think it’s really important and it made an impact on me.”

“Interesting novel – co-authored and very relevant to the Black Lives Matter movement. It explores the close friendship between a black woman and a white woman and the ways race can divide people despite their best intentions. Riley is a successful black media reporter and her friendship with her oldest friend Jenny is tested to the limit when she reports on an incident where a young, innocent black boy is mistakenly shot by two white police men – one of them Jenny’s husband. A strong story addressing many sensitive issues including racism, prejudice, betrayal and friendship and love.” 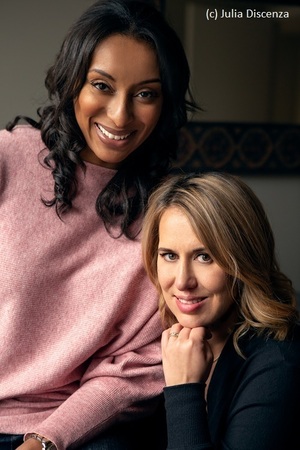 Christine Pride worked in publishing for fifteen years. Over the course of her career, Christine worked with a variety of established and debut writers and published many New York Times bestsellers and critically acclaimed books including; From Scratch, Heaven is Here, and A Reason to Believe. Christine now writes full-time.

Jo Piazza is an award-winning journalist and editor who has written for The Wall Street Journal, The New York Times, Glamour, Marie Claire and Elle. The bestselling author of The Knock Off, How to Be Married, Fitness Junkie, and Charlotte Walsh Likes to Win, she currently lives in Philadelphia with her husband and two children.

We Are Not Like Them is their debut novel as a writing duo.

Tune in to the Steve Wright show on Wednesday 15 December to hear a live interview with Christine and Jo.

Planning to buy We Are Not Like Them for your group? Buy books from Hive or from Bookshop.org and support The Reading Agency and local bookshops at no extra cost to you.