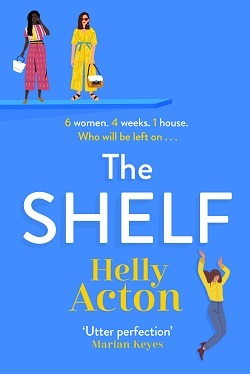 The next book to be featured on the Jo Whiley Radio 2 Book Club will be The Shelf, a funny and thought-provoking debut novel by Helly Acton. The book was released on 9 July and Helly will be on the show on Monday 13 July.

We have an exclusive extract available for you to read, and we have the chance for you to win 10 copies of this fantastic novel for your reading group! Please enter by Friday 17 July.

A funny, feminist and all-too-relatable novel about our obsession with coupling up, settling down and the battle we all have with accepting ourselves, The Shelf introduces the freshest new voice in women’s fiction.

The book was selected with the help of a panel of library staff from across the UK. Our readers loved The Shelf – here are some of their comments:

“This took me completely by surprise! I got a shock when I realised that the protagonist, Amy, had been unsuspectingly dumped by her boyfriend into a reality show. What followed was an engaging, funny and page-turning exploration of female friendship and the dynamics and appeal of reality TV. Themes of feminism and the importance of self-value and confidence were neatly woven throughout the book. The characters were realistic and many women would identify with at least one of the housemates. It so completely captured the spirit of the Big Brother and Love Island type of show, and Amy was such a likeable, realistic heroine that I thoroughly enjoyed it.”

“This is about Amy, she is 32 and waiting for her boyfriend to propose, so when he invites her on holiday, she thinks this is it, but no, he has put her forward for a reality tv programme, where she is dumped live on the telly. I hated the start, as Amy’s boyfriend was a narcissistic control freak who was using her to publicise his business. However, once the women got together in the house rather than having endless cat fights a much more interesting novel developed that said a lot about social media and the pressure that women are under in their daily life. A really funny and interesting book, at this time of lockdown I enjoyed it very much.”

“Just what we need right now – this was light and fun, whilst also still having a message about the pressures put on women, especially when it comes to expectations around marriage and children. You’ll want to scream at Amy when she’s desperate for her horrible boyfriend to propose, and you’ll want to punch him on the nose on more than one occasion, but ultimately this is more about female friendships, learning to love yourself, and working towards what you really want, not what society thinks you should want. A perfect summer read!”

Helly Acton is a copywriter from London with past lives in the Middle East, Africa and Australia. Born in Zimbabwe, Helly and her family emigrated to the East Sussex coast when she was 15 years old. Here, she finished school and spent her holidays in Saudi Arabia, where her father had been placed with work. She studied Law at King’s College London before following a more creative path into advertising.

In her mid-twenties, Helly escaped the rat race and took a three-month career break to travel in Africa, India and Asia before landing in Australia. What was supposed to last one year ended up lasting six, and after a life-affirming break-up in Sydney she returned home to find herself the last of her single friends. Helly threw herself into the deep end of online dating in the city and uses her experience as a single woman in her early thirties, torn between settling down and savouring her independence, as a source of inspiration for her stories. 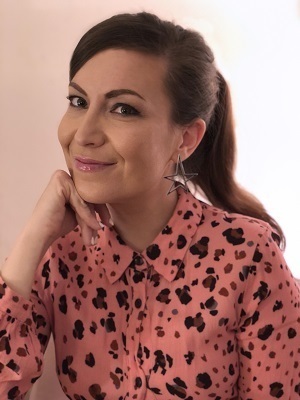 A word from Helly

“I’m over the moon and starry-eyed to hear that my novel The Shelf has been selected for the Radio 2 Book Club. As a debut author, it’s a dream come true to have the support of such a well-respected group.

Parts of The Shelf were written in the sanctuaries of two libraries – The London Library and Fulham Library. They provided the clear space, calm atmosphere and magical scent of books in the air that inspired me to keep writing and finish my story. While The Shelf is no Ulysses, I hope it will provide readers with a lighthearted escape (and a feminist zing) and I feel honoured and proud to have been chosen. Thank you to The Reading Agency and librarians everywhere, for continuing to care for authors, books and stories that inspire people of all ages, every day.”

Tune in to Jo Whiley’s show on Monday 13 July to hear a live interview with Helly.

Planning to buy The Shelf for your group? Buy books from Hive and support The Reading Agency and local bookshops at no extra cost to you.