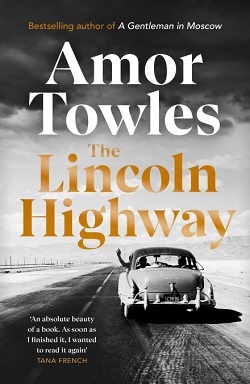 The next book to be featured on the Radio 2 Book Club with Steve Wright will be The Lincoln Highway, the brilliant new novel from bestselling author Amor Towles. The book was released on 5 October and Amor will be on the show with Steve on Tuesday 9th November.

In June, 1954, eighteen-year-old Emmett Watson is driven home to Nebraska by the warden of the juvenile work farm where he has just served fifteen months for involuntary manslaughter.

With his mother long gone, his father recently deceased, and the family farm foreclosed upon by the bank, Emmett plans to pick up his eight-year-old brother Billy and head to California to start a new life.

But when the warden drives away, Emmett discovers that two friends from the work farm have stowed away in the trunk of the warden’s car. They have a very different plan for Emmett’s future, one that will take the four of them on a fateful journey in the opposite direction – to New York City.

Bursting with life, charm, richly imagined settings and unforgettable characters, The Lincoln Highway is an extraordinary journey through 1950s America from the pen of a master storyteller.

The book was selected with the help of a panel of library staff from across the UK. Our readers loved The Lincoln Highway – here are some of their comments:

“This is one of those books that you know as you read it will become something of a classic. It’s a big book (long as well, but that’s not what I meant) covering so much: big characters, a massive journey, lots of back stories, a look at rural American life in the 1950s, and all told from multiple viewpoints. The four main characters Emmett, Billy, Duchess and Woolly tell their part of each of the ten days in which the novel is set, with occasional chapters written told by smaller characters. There’s a lightness of touch which keeps it humorous and accessible, and lots of foreshadowing. The Lincoln Highway stretches from New York to San Francisco, passing through Nebraska somewhere around the halfway point. Emmett has returned to the family farm in Nebraska after a year in a Work Farm (a detention centre of sorts). His mother left long ago and his father has just died, so Emmett plans to take his little brother Billy west on the Lincoln Highway to start afresh in San Francisco. However, two other inmates from the Work Farm have stowed away in the back of the Warden’s car and have other ideas for Emmett and Billy, including heading 180 degrees the wrong direction on the Lincoln Highway to get to New York. As the book progresses, the voices of each of the boys is distinct and endearing.”

“A rather long and involved book, but a brilliant story that moved along quickly. Told from the individual viewpoints of the main characters it centres on the escapades of three young men and an 8-year-old boy in 1950s Mid-West America. Eighteen-year-old Emmett Watson is driven home to Nebraska by the warden of the work farm where he has just served a year for involuntary manslaughter. His intention is to pick up his eight-year-old brother and head west where they can start their lives anew. But when the warden drives away, Emmett discovers that two friends from the work farm have hidden themselves in the trunk of the warden’s car. And so begins the story. This book is part road trip, part thriller and I found myself constantly on edge and in a state of unease throughout. It was akin to watching one of those films where you know everything is going to go tits up at some point. This book marks a departure from the author’s usual plotlines but it certainly does not disappoint.”

“A road trip, like a quest of old, in 1950’s America, sees a group of (mainly) young men – all great, empathic characters you care about and are rooting for, traversing the Lincoln Highway. An amazing storyline, with an aside like a Greek chorus, and a fortune at stake! The phrase, ‘a real tour de force’ is over-used, but in this instance, is justifiably true! As soon as I finished this story, I wanted to go straight back to the beginning and start all over again!” 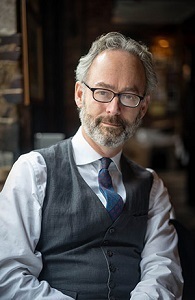 Born and raised in the Boston area, Amor Towles graduated from Yale College and received an MA in English from Stanford University. Having worked as an investment professional for over twenty years, he now devotes himself full time to writing in Manhattan, where he lives with his wife and two children. His novels Rules of Civility and A Gentleman in Moscow have collectively sold more than four million copies and have been translated into over thirty languages.

Rules of Civility, which was published in 2011, was a New York Times bestseller and was named by the Wall Street Journal as one of the best books of 2011. The book’s French translation received the 2012 Prix Fitzgerald.

A Gentleman in Moscow, which was published in 2016, was on the New York Times bestseller list for two years and was named one of the best books of 2016 by the Chicago Tribune, the Washington Post, the Philadelphia Inquirer, the San Francisco Chronicle, and NPR.

Tune in to the Steve Wright show on Tuesday 9 November to hear a live interview with Amor Towles.

Have you read The Lincoln Highway, or A Gentleman in Moscow, which was a previous Radio 2 Book Club pick? You can share your thoughts with us on Twitter using #R2BookClub and you can also follow Amor Towles.

Planning to buy The Lincoln Highway for your group? Buy books from Hive or from Bookshop.org and support The Reading Agency and local bookshops at no extra cost to you.