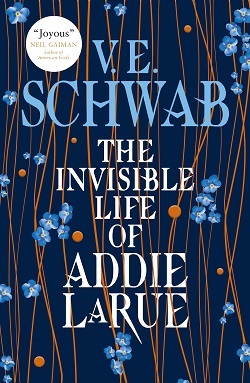 The next book to be featured on the Jo Whiley Radio 2 Book Club will be The Invisible Life of Addie LaRue, the new novel from V.E. Schwab. the book was released on 6 October and Victoria will be on the show on Monday 19 October.

We have the chance for you to win 10 copies of this fantastic novel for your reading group! Please enter by Friday 23 October.

The Invisible Life of Addie LaRue

When Addie La Rue makes a pact with the devil, she trades her soul for immortality. But there’s always a price – the devil takes away her place in the world, cursing her to be forgotten by everyone.

Addie flees her tiny home town in 18th-Century France, beginning a journey that takes her across the world, learning to live a life where no one remembers her and everything she owns is lost and broken. Existing only as a muse for artists throughout history, she learns to fall in love anew every single day.

Her only companion on this journey is her dark devil with hypnotic green eyes, who visits her each year on the anniversary of their deal. Alone in the world, Addie has no choice but to confront him, to understand him, maybe to beat him.

Until one day, in a second-hand bookshop in Manhattan, Addie meets someone who remembers her. Suddenly thrust back into a real, normal life, Addie realises she can’t escape her fate forever.

The book was selected with the help of a panel of library staff from across the UK. Our readers loved The Invisible Life of Addie LaRue – here are some of their comments:

“Sometimes you just find yourself wowed by a book without being able to put your finger on exactly why for a long while, until you realise that actually it’s everything being done so well. There’s such a fantastic resigned atmosphere at the start of this story that you’re instantly drawn into the character of Addie, a girl who made a deal with a devil that means she won’t age or die, but she’ll be forgotten by everyone she meets – that is, at least, until one person 300 years later tells her that he remembers her. To see her struggles in the modern day, whilst visiting her past and her journey through history, is a fantastic way of seeing what she’s been through and the stubbornness that keeps her going when she could give in and end her deal (and her life) with the devil at any time. It’s a long book, but it doesn’t feel it when you’re desperate to see another snapshot of her life. It’s exactly the type of book that you think ‘I need the hardback of this on my shelf, with a paperback that I actually read so that I don’t ever have to open the hardback and ruin it’. A wonderful atmosphere and battle between a girl who wanted to live, not just exist, and a fiendish trickster of a devil that honestly had me enraptured from the start.”

“This is a fantastic book. The premise is a little supernatural (demons, old gods, deals with the devil) – which is somewhat necessary when your protagonist is over 300 years old – but it is more speculative fiction than fantasy. Addie is a girl born into early 18th century rural France, and strongly resistant to the role she is expected to perform as a woman – sweet, hard-working, to live her life in the service of others in the same tiny village. Eventually, she is set to be married off and, in her desperation, makes a deal with a shadowy figure that leads (among other things) to her being more-or-less immortal. However, she is also unable to leave a mark on anything. Anyone she meets immediately forgets her as soon as she walks across a threshold or closes a door between them, leaving her to wander through the ages alone. The story is incredible – it dives in to how this affects her, flicking back and forth through time to tell her story, but never feeling fractured or slow as every chapter has something happen. The modern-day part of the story is exciting and intriguing, as things begin to change, and the past adds a layered image of this woman, showing just enough to add nuance and understanding without trying to tell us every detail of 300 years of life. The entire book is very well-written and incredibly easy to read, and is incredibly enjoyable. The different sections of the book are prefaced by an art object that ties in to the story, which is another clever little touch to highlight certain things and tie others together.”

“Beautifully written, atmospheric novel about Addie who makes a deal with the devil, so that she can escape a boring, small town, married life. The story follows her 300-year existence, across time, having to move on every day, as the deal leaves her cursed to never be remembered by anyone. Eventually, arriving in the modern day – she finds someone who can remember her – a miracle! Beautifully descriptive and full of character – Addie remains stubborn throughout, battling with the elusive devil, who returns periodically to try her. Highly recommended.” 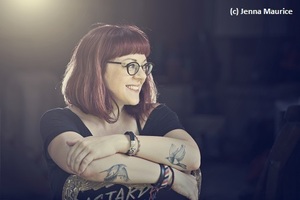 V.E. Schwab is the No. 1 New York Times bestselling author of Vicious, The Near Witch, and the Shades of Magic series, which was described as “a classic work of fantasy” by Deborah Harkness. It was one of Waterstones’ Best Fantasy Books of 2015, The Guardian’s Best Science Fiction novels, and a Telegraph choice. The Independent has called her “The natural successor to Diana Wynne Jones”. She lives between Nashville, France and Edinburgh.

Tune in to Jo Whiley’s show on Monday 19 October to hear a live interview with Victoria.

Have you read The Invisible Life of Addie LaRue? You can share your thoughts with us on Twitter using #R2BookClub and tagging Titan Books. You can also follow V.E. Schwab.

Planning to buy The Invisible Life of Addie LaRue for your group? Buy books from Hive and support The Reading Agency and local bookshops at no extra cost to you.