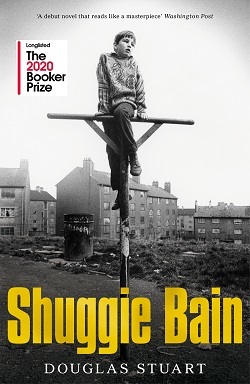 The next book to be featured on the Jo Whiley Radio 2 Book Club will be Shuggie Bain, the heart-breaking Booker longlisted debut novel by Douglas Stuart. The book was released on 6 August and Douglas will be on the show on Monday 24 August.

We have the chance for you to win 10 copies of this wonderful novel for your reading group! Please enter by Friday 28 August.

1981. Glasgow. The city is dying. Poverty is on the rise. People watch the lives they had hoped for disappear from view. Agnes Bain had always expected more. She dreamed of greater things: a house with its own front door, a life bought and paid for outright (like her perfect – but false – teeth). When her philandering husband leaves, she and her three children find themselves trapped in a mining town decimated by Thatcherism. As Agnes increasingly turns to alcohol for comfort, her children try their best to save her. Yet one by one they have to abandon her in order to save themselves.

It is her son Shuggie who holds out hope the longest. But Shuggie has problems of his own: despite all his efforts to pass as a ‘normal boy’, everyone has decided that Shuggie is ‘no right’. Agnes wants to support and protect her son, but her addiction has the power to eclipse everyone close to her, including her beloved Shuggie.

Laying bare the ruthlessness of poverty, the limits of love, and the hollowness of pride, Shuggie Bain is a blistering and heartbreaking debut, and an exploration of the unsinkable love that only children can have for their damaged parents.

The book was selected with the help of a panel of library staff from across the UK. Our readers loved Shuggie Bain – here are some of their comments:

“Where to start with this book? It’s gritty, depressing as hell, heart-wrenching, very graphic and upsetting and absolutely brilliant! There were times when I felt like I needed to take a shower after reading a chapter. There were also times when I was so engrossed in the story that I almost forgot about the horrible situation that we all currently find ourselves in. If you think it’s gloomy now, try the rougher end of 1980s Glasgow for a bit of perspective. Everything is so bleak, ugly and nicotine stained you can almost taste the grim diet of saturated fat, fags, drugs, cheap alcohol and emotional and physical abuse. The black and white cover perfectly sums up the mood of the book. I’ve been hearing reports of some readers struggling with the Glasgow dialect, but if you stick with it and adjust to the realism, you’ll find a wonderful gem that tells the story of a young boy’s struggle to make sense of the world around him as he grows up. It’s heart breaking, sad and totally engrossing. A coming of age story set amongst the tenements, urban decay, broken bottles and dreams of Thatcher’s Britain. An amazing debut novel!”

“What can I say? This must be my book of the year. Absolutely gripping all the way through. The characters are all so real, so many shades of grey between the good and the bad. Yes, it’s heart-breaking at times but yet never makes you want to stop reading. I read it in the strictest part of lockdown and it made me realise that even when life seems tough, I am so lucky to have what I have. The book is so nuanced and well-balanced that it never feels preachy, just gives an honest account of how some lives go, and how sometimes your surroundings can seem almost impossible to escape. An incredibly accomplished debut that everyone should read.” 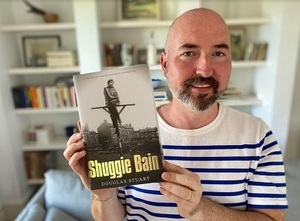 Douglas Stuart was born and raised in Glasgow. After graduating from the Royal College of Art in London, he moved to New York City, where he began a career in fashion design. His work has appeared in the New Yorker and on LitHub.

Shuggie Bain is his first novel and is longlisted for the 2020 Booker Prize.

Tune in to Jo Whiley’s show on Monday 24 August to hear a live interview with Douglas.

Planning to buy Shuggie Bain for your group? Buy books from Hive and support The Reading Agency and local bookshops at no extra cost to you.