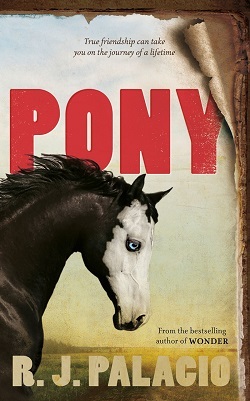 The next book to be featured on the Radio 2 Book Club with Steve Wright will be Pony, the powerfully evocative new novel from R.J. Palacio. The book was released on 28 September and she will be on the show with Steve on Wednesday 20 October.

We have an exclusive extract for you to read now.

When Silas Bird wakes in the dead of night, he watches powerlessly as three strangers take his father away. Silas is left shaken, scared and alone, except for the presence of his companion, Mittenwool…who happens to be a ghost. But then a mysterious pony shows up at his door, and Silas knows what he has to do.

So begins a perilous journey to find his father – a journey that will connect him with his past, his future, and the unknowable world around him.

The book was selected with the help of a panel of library staff from across the UK. Our readers loved Pony – here are some of their comments:

“From the moment Silas Bird’s cherished and admired Pa is whisked away in the dead of night by three sinister men from a notorious counterfeiting ring, I was hooked and couldn’t put this novel down. Motherless, lightning-struck Silas worships his Pa, a brilliant, educated man with a scientific mind. R.J. Palacio manages to combine the innovations of photography during the 19th century, with American spiritualism and a gripping expedition which teams up Silas, his lifelong companion Mittenwool (who happens to be a ghost) and the eponymous Pony, a white-faced Arabian stallion. Despite promising to remain on their remote Boneville homestead for a week until his father returns home, Silas ventures into the woods he fears hoping to find him. Bears and puma lurk, but it is the ghosts only Silas sees that frighten him most. Mittenwool tells Silas his journey is a fool’s quest, but this unlikely trio are compelled forward. Silas’s memories of his father and the talisman of his mother’s violin give him courage and determination far beyond his twelve years. On his journey to find Pa and bring him home, Silas encounters Marshal Farmer who is after the same counterfeiting ring and the most wanted counterfeiter of all, Mac Boat. He also meets two lawmen, Sheriff Desimonde Chalfont and Deputy Jack Beautyman, both of whom are veterans of the Mexican-American War. There are some inventive twists and turns in Silas’s story and everything dovetails at the end, as beautifully crafted a narrative as Elsa’s violin. While we never meet Elsa, her independent spirit and love for her husband and child run throughout the novel. Palacio does a superb job of developing nuanced relationships, whether it’s the father-son bond, Silas’s complex relationship with Mittenwool, his connection with Pony or the extraordinary brotherhood Desi and Jack share. Palacio’s notes about her research also provide some fascinating insights. A wonderful read with plenty for reading group discussion, including what Indigenous peoples have endured (a very timely issue).”

“I loved this book and read it quickly, not wanting to put it down. The characters – twelve-year-old Silas, his father and his companion Mittenwool – were marvellous, so sympathetic. It was well written. The period and setting, the American West in 1860, were interesting and evocative, and the dialogue rang true. It was intriguing, with the questions about Mittenwool and the otherworldly elements. The story was exciting, as Silas felt compelled to set out on his journey with Pony despite his father’s orders to wait at home, met fascinating characters, and showed courage and determination beyond his years on his quest. Although it is a children’s book, I think it will appeal to all ages.”

“Set in 19th Century America, Silas and his father’s destinies are intertwined with the new science of photography. Silas was struck by lightning as a child and the image of the tree was imprinted on his back (he then becomes sensitive and can communicate with ghosts!) and his father was forcibly kidnapped by counterfeiters because of his skill. A thrilling exploration of how a young boy’s life changes overnight and how his resilience colours his life. A truly engaging and engrossing read!” 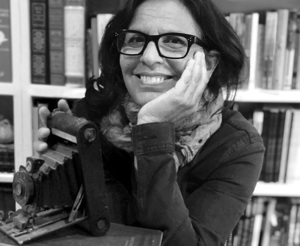 R.J. Palacio is the author of the #1 New York Times bestseller Wonder, which has sold over 12 million copies worldwide with the book published in over 50 languages. Wonder was made into a blockbuster movie starring Julia Roberts, Owen Wilson, and Jacob Tremblay. Palacio’s other bestselling books include 365 Days of Wonder, Auggie & Me: Three Wonder Stories, the picture book We’re All Wonders, and the graphic novel White Bird, which is currently being filmed as a major motion picture starring Gillian Anderson and Helen Mirren. Palacio lives in Brooklyn with her husband, two sons, and two dogs.

Tune in to the Steve Wright show on Wednesday 20 October to hear a live interview with R.J. Palacio.

Planning to buy Pony for your group? Buy books from Hive or from Bookshop.org and support The Reading Agency and local bookshops at no extra cost to you.