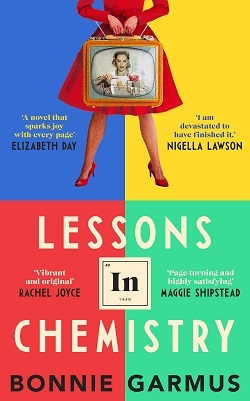 The next book to be featured on the Radio 2 Book Club with Steve Wright will be Lessons in Chemistry, the brilliant debut novel by Bonnie Garmus. The book was released on 5 April and Bonnie will be on the show with Steve on Wednesday 27 April.

We have an exclusive extract available for you to read. We also have a Book Club Kit created by Transworld.

But it’s the early 1960s and her all-male team at Hastings Research Institute take a very unscientific view of equality. Except for one: Calvin Evans; the lonely, brilliant, Nobel-prize nominated grudge-holder who falls in love with – of all things – her mind. True chemistry results.

But like science, life is unpredictable. Which is why a few years later, Elizabeth Zott finds herself not only a single mother, but the reluctant star of America’s most beloved cooking show Supper at Six.

Elizabeth’s unusual approach to cooking (“combine one tablespoon acetic acid with a pinch of sodium chloride”) proves revolutionary. But as her following grows, not everyone is happy. Because as it turns out, Elizabeth Zott isn’t just teaching women to cook. She’s daring them to change the status quo.

The book was selected with the help of a panel of library staff from across the UK. Our readers loved Lessons in Chemistry – here are some of their comments:

“Set in California between 1952-1961, this is the story of Elizabeth Zott, a scientist and chemist, surrounded by small-minded male colleagues who feel women have no place in science. Forced to drop out of her PhD studies after being sexually assaulted by her professor (who she stabs with her pencil), Elizabeth is resigned to a low-level amino acid study at Hasting Research institute. Then she meets Calvin Evans – scientist and rower, and the chemistry is instant. Both Zott and he have found their soulmates – until a tragic incident with a dog and a leash. This is a brilliant story of a woman who is determined to make her mark on the world and not willing to let anyone get in her way. She’s feisty, heroic, and intelligent, and becomes the star of a TV cookery show in an effort to teach the nation how to make food that matters. The relationships with Evans (and his sad backstory), their precocious daughter Mad, their dog Six-Thirty, Harriet their neighbour and Walter Pine the TV producer and so well drawn. The TV show becomes a call to arms to the millions of women who follow her ‘lessons in chemistry’ encouraging all to ‘use the laws of chemistry and change the status quo.’ Brilliant – loved every minute of this book!”

“‘Children set the table, your mother needs a moment’ the tagline of the woman that was Elizabeth Zott, TV cook extraordinaire, mother and most importantly of all chemist. Yet this was the early 1960s and women weren’t chemists, women didn’t work, have children out of wedlock or indeed have an opinion. Zott had all of these and more. Gamus did not stint on showing us a woman who was outwardly strong, but with a naivety that made her assume the men in her first job in a chemistry research institute would view her work with respect, would accept her as an equal, would see her relationship with famous chemist Calvin Evans as wonderful and right. But hell no, they hated her strength, her intellect, her relationship, her inability to crumble and cry when challenged, the only way to crush her to accept her work as their own, browbeat her with their assumed sexual prowess. Matters worsened, and Elizabeth is left with their daughter Mad, a four-year-old with the intellect and foresight of an adult. She was precocious, but the catalyst for Zott’s submergence into the world of daytime TV and her own cookery show and that is where the story really took off. A cookery show with a difference, one that used chemistry, that gave Zott a platform to push the societal norms, to challenge the women who watched to not accept the status quo, they were more than mere housewives, mothers, they had choices, lives beyond the family home. You knew Gamus was not going to lull us into thinking this was it, Zott had made it society would change, oh no it seemed Zott’s issues were only beginning. Underneath that hard exterior was a woman who had feelings, who grieved the love of her life, yet didn’t know how to deal with those emotions. Gamus used Mad to dig into her father’s past, her trusty dog, six-thirty at her side and indeed the star of the novel. What she uncovered was a story of the times, of sexual abuse, of greed, but also the start of a new beginning for her mother and herself. I could go on and on about this novel, could wax lyrical at Gamus’ skill to tell a story, to have created such a truly wonderful unique and wonderful character.”

“Instantly engaging and interesting to read about the 1950s period as it’s not one I often see. Elizabeth is a fascinating and slightly off the wall character, understandable given her family history. Although this is made obvious through her behaviour in the book, she is well written and not stereotyped. Her determination to be her own person sometimes helps, sometimes aggravates her relationship with Calvin. I love that she is so independent and strong.”

“Wow – if this book doesn’t end up on my best of the year come December then 2022 is going to be the best book year ever! From the start I loved Elizabeth and Calvin’s spiky characters and how they interacted with the world. The book felt very in keeping with the time frame (America of the 1950s and 1960s) – life experiences were always going to make Elizabeth forge her own path and how she does so is magnificent – fighting, or trying to fight, every injustice that she perceives and refusing to accept ‘you can’t do that because you’re….’ as a reason for anything. This book is a wonderful rallying call and a reminder that the world isn’t fair and that not everything can be solved by hard work or money. The supporting (and supportive) characters are all well-drawn, rounded people and leap of the page. So much to talk about in this book – it is going to be great for book clubs but also just for buying for all your reader friends.” 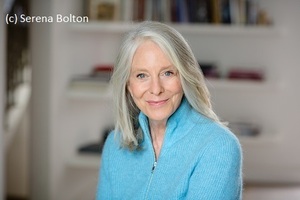 Bonnie Garmus is a copywriter/creative director who has worked for a wide range of clients, focusing primarily on technology, medicine, and education.

She is an open-water swimmer, a rower, and mother to two daughters. Most recently from Seattle, she lives in London with her husband and her dog, 99.

A word from Bonnie

“I was so delighted to learn that Lessons in Chemistry has been chosen by Radio 2 Book Club! I’m a huge fan of libraries; they mean everything to me. And since books chosen for your club come from librarian and reader recommendations, I feel extra honoured.

As a child I had a terrible stutter; I tried to avoid speaking at all costs. For me, reading was more than an escape; it was my salvation. Only when I read silently did I achieve perfect fluency. But when I was in conversation with my favourite librarian and the fluency disappeared, she never once corrected me. Instead, she increased my lending limit (double the amount most kids were allowed) and often set new books aside so I could be among the first to check them out. I think she’d be delighted to know a book I wrote was chosen for your club. Thanks so much.”

Tune in to the Steve Wright show on Wednesday 27 April to hear a live interview with Bonnie.

Planning to buy Lessons in Chemistry for your group? Buy books from Hive or from Bookshop.org and support The Reading Agency and local bookshops at no extra cost to you.