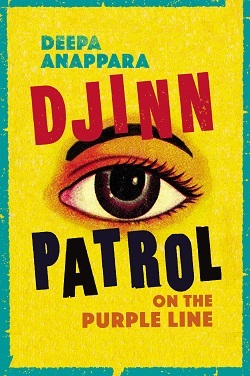 The next book to be featured on the Jo Whiley Radio 2 Book Club will be Djinn Patrol on the Purple Line, the wonderful debut novel by Deepa Anappara. Deepa will be on the show on Monday 13 January and the book will be released on 30 January.

We have the chance for you to win 10 copies of this fantastic novel for your reading group! Please enter by Friday 17 January.

Djinn Patrol on the Purple Line

Nine-year-old Jai watches too many reality cop shows, thinks he’s smarter than his friend Pari (even though she always gets top marks) and considers himself to be a better boss than Faiz (even though Faiz is the one with a job).

When a boy at school goes missing, Jai decides to use the crime-solving skills he has picked up from episodes of Police Patrol to find him. With Pari and Faiz by his side, Jai ventures into some of the most dangerous parts of the city; the bazaar at night, and even the railway station at the end of the Purple Line.
But kids continue to vanish, and the trio must confront terrified parents, an indifferent police force and soul-snatching djinns in order to uncover the truth.

The book was selected with the help of a panel of library staff from across the UK. Our readers loved Djinn Patrol on the Purple Line – here are some of their comments:

“A very atmospheric read that examines the epidemic of missing children in India (as many as 180 children go missing each day) through the eyes of a naïve, TV-obsessed young boy living in the slums. The author has created a vivid depiction of life in an Indian slum with corrupt police and nobody batting an eyelid when children are being exploited. The sights, sounds and smells are so vividly described that at times the reader is transported to the streets and alleys mentioned in the story. Hopefully this story will help raise awareness of the very real and largely unreported problem of child exploitation and disappearances throughout the subcontinent.”

“At first, I thought I might not be able to engage with this story, set in India, of disappearing children, corrupt police, awful living conditions, and the spirits of the dead. But I was pulled in by the strong, clear writing and the passion behind it and soon identified with the main characters, especially Jai, the child narrator and his sister Didi. I felt horror at how awful the world can be, and admiration for the love and endurance which can still persist in such harsh lives.” 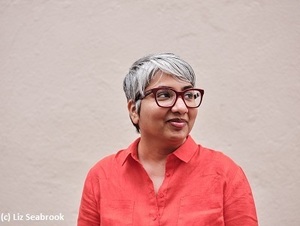 Deepa Anappara grew up in Kerala, southern India, and worked as a journalist in cities including Mumbai and Delhi. Her reports on the impact of poverty and religious violence on the education of children won the Developing Asia Journalism Awards, the Every Human has Rights Media Awards, and the Sanskriti-Prabha Dutt Fellowship in Journalism. A partial of her debut novel, Djinn Patrol on the Purple Line, won the Lucy Cavendish Fiction Prize, the Bridport/Peggy Chapman-Andrews Award and the Deborah Rogers Foundation Writers Award. She has an MA in Creative Writing from the University of East Anglia, Norwich, and is currently studying for a PhD on a CHASE doctoral fellowship.

A word from Deepa

“I am grateful to The Reading Agency and the Radio 2 Book Club for selecting Djinn Patrol on the Purple Line for discussion. Ever since I moved to the UK in 2008, libraries have been my lifeline. When I first joined an evening course in creative writing, and was presented with a reading list longer than my arm, it was to my local library that I turned to for help. I have spent many hours there not just reading but also writing, and I have seen how communities can come together there. I am aware of the precarious existence of libraries these days, and I also know how important they are, particularly because I didn’t have access to a public library while growing up in a small village in India. It’s a privilege, therefore, to have the support of librarians for my first novel.

Among other subjects, Djinn Patrol on the Purple Line examines the nature of the stories we tell ourselves, and the universal human urge to fill in the gaps in a narrative with our imagination. I imagine book clubs will find plenty to discuss in the book: the inequities in the world around us, the trafficking of children, the lives of women in a patriarchal society, the vilification of certain communities by those in power for personal and political gains, and even the popularity of reality TV shows! And I can only hope that readers will be able to appreciate the determination of my novel’s nine-year-old narrator Jai, and his friends, to rise above their difficult circumstances, which mirrors the determination of the children I had interviewed while working as a journalist in India, and who inspired the characters in this book.”

Tune in to Jo Whiley’s show on Monday 13 January to hear a live interview with Deepa.

Have you read Djinn Patrol on the Purple Line? You can share your thoughts with us on Twitter using #R2BookClub and tagging @ChattoBooks.

Planning to buy Djinn Patrol on the Purple Line for your group? Buy books from Hive and support The Reading Agency and local bookshops at no extra cost to you.