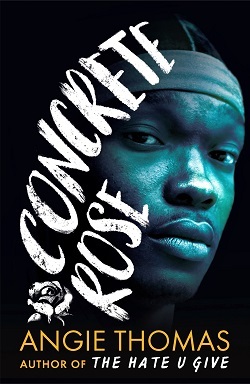 The first book to be featured on the Radio 2 Book Club with Steve Wright will be Concrete Rose, the hard-hitting new YA novel from bestselling author Angie Thomas. The book was released on 12 January and Angie will be on the show on Thursday 11 February.

We have the chance for you to win 10 copies of this fantastic novel for your reading group! Please enter by Friday 19 February.

We have an exclusive extract available for you to read. We also have a great discussion guide for groups to use.

The son of a drug king, seventeen-year-old Maverick Carter is negotiating life in Garden Heights as he balances school, slinging dope, and working two jobs while his dad is in prison. He’s got it all under control – until, that is, Mav finds out he’s a father. Suddenly he has a baby, Seven, who depends on him for everything. Loyalty, revenge and responsibility threaten to tear Mav apart, especially after the brutal murder of a loved one. So, when Mav is offered the chance to go straight, it’s an opportunity – in a world where he’s expected to amount to nothing – to prove he’s different and figure out for himself what it really means to be a man.

The book was selected with the help of a panel of library staff from across the UK. Our readers loved Concrete Rose – here are some of their comments:

“This book is a window to another world. It is set in a poor neighbourhood in an American city, in a world of gangs, revenge killings, drug dealing and teenage pregnancy. This makes it sound grim, but it brings humanity and understanding to the situation. The story moves along at a cracking pace (no pun intended), and though it is clear early on where it is going, and that our protagonist Mav was going to face a certain moral dilemma, it kept me guessing which way he was going to turn. Highly recommended.”

“Angie Thomas has done it again! Concrete Rose has a very similar feel to The Hate U Give and On the Come Up, and will definitely resonate with fans of her previous books, especially as it’s essentially a prequel to The Hate U Give, telling the story of Starr’s father – a 17-year-old whose suddenly becomes a father after a DNA test showing that the baby of a girl he slept with is his, and not her boyfriend’s (who is also his best friend). Although all three of her books deal with heavy issues, this one did feel different in that it’s about teen pregnancy, but I think it does a really good job of it, in particular showing how he adapts and struggles to become a parent while he’s still so young. There are a lot of the same themes as the other books throughout, with gang violence, shooting, drug dealing, imprisonment, family troubles – it’s heavy but written in such an engaging and accessible way.”

“A prequel of sorts, this is set 17 years before The Hate U Give and focuses on Starr’s dad, Maverick (who I loved from THUG). Maverick is 17 and as the son of a former gang legend and he only knows how to make money by dealing for the King Lords to support his mum, while his dad’s in prison. Then he finds out he is a father to Seven. When he gets the chance to leave the gang, he takes it. He struggles with his place when loyalty, revenge and responsibility keep pulling him apart. It’s a tense but great read. It is going to be most appealing to teenagers but still lots for adults to enjoy in the book and the discussion around Black Lives Matter and the divide in America is so important to keep reading and talking about. Even though this book is set in 90s lots of the experiences are still relevant.”

Angie Thomas is the author of the hugely critically acclaimed and bestselling The Hate U Give. She was born and raised in Jackson, Mississippi. A former teen rapper, she is the recipient of a Walter Dean Myers Grant, awarded by the We Need Diverse Books campaign. 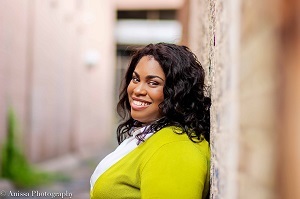 A word from Angie

“Libraries became a haven for me when I was six years old, when two drug dealers decided that they wanted to recreate the wild west in the local play park and I was nearly caught in the shooting. My mom took me to the library the very next day. I remember leaving with so many books that day, just to see that there was more to the world than my piece of it. I started writing right around the same time I started reading – I never wanted the books to end so I would go home and figure out my own stories to continue them. I really think that books are a form of activism, because a lot of the time they might be showing us a side of the world that we may not have known about, and that’s why libraries are so important. It makes it all the more special that Concrete Rose has been selected for the Radio 2 Book Club, along with both my previous novels in past book clubs, On The Come Up and The Hate U Give, and that book groups around the UK can open my books and maybe find a window into another side of the world to their own.”

Tune in to the Steve Wright show on Thursday 11 February to hear a live interview with Angie.

Have you read Concrete Rose, or Angie’s other novels? You can share your thoughts with us on Twitter using #R2BookClub and you can also follow Angie.

Planning to buy Concrete Rose for your group, school, or as a gift? Buy books from Hive and support The Reading Agency and local bookshops at no extra cost to you.