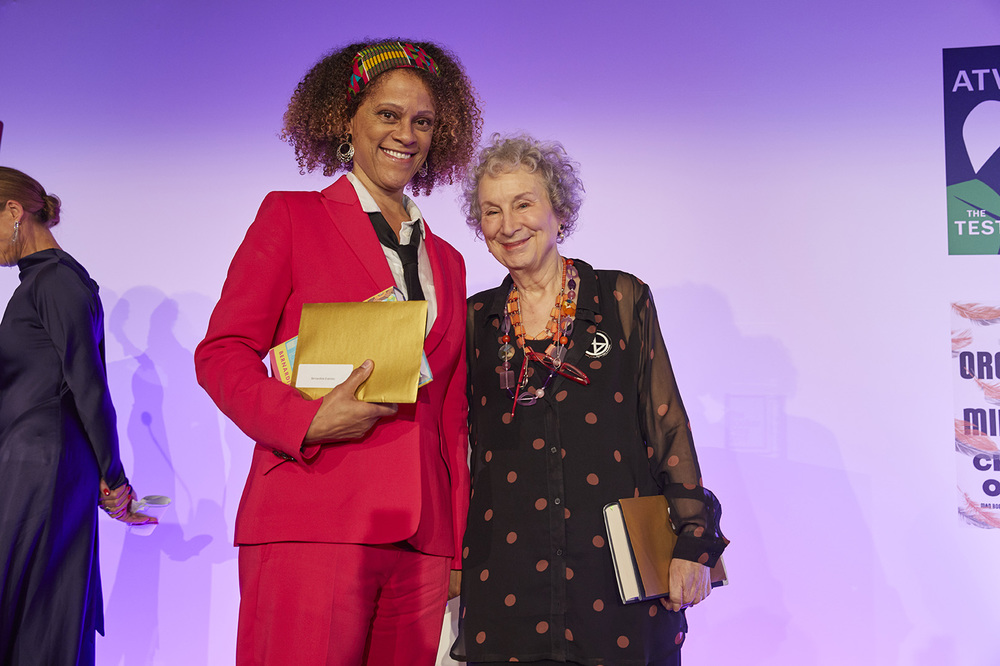 In a shock announcement, the judges of the 2019 Booker Prize for Fiction have awarded the prize to two authors: Margaret Atwood for The Testaments and Bernardine Evaristo for Girl, Woman, Other.

The Booker Prize has been jointly awarded twice before, to Nadine Gordimer and Stanley Middleton in 1974 and to Michael Ondaatje and Barry Unsworth in 1992. In 1993, the rules were changed so that only one author could win the prize. This is the first time since then that two authors have been announced as joint-winners. The 2019 winners will share the £50,000 prize money.

Bernardine Evaristo is the first black woman to be awarded the Booker Prize. She wins with Girl, Woman, Other, her eighth book of fiction, which she has written alongside essays, drama and writing for BBC radio. Evaristo drew on aspects of the African diaspora, be it past, present, real of imagined, to inform Girl, Woman, Other.

“This ten month process has been a wild adventure. In the room today we talked for five hours about books we love. Two novels we cannot compromise on. They are both phenomenal books that will delight readers and will resonate for ages to come.”

“Over an agonising five hours, the 2019 Booker Prize judges discussed all of the much-loved books on their shortlist, and found it impossible to single out one winner. They were not so much divided as unwilling to jettison any more when they finally got down to two, and asked if they might split the prize between them. On being told that it was definitively against the rules, the judges held a further discussion and chose to flout them. They left the judging room happy and proud, their twin winners gesturing towards the six they would have wanted, had it been possible to split the prize any further.”

The Testaments is set more than fifteen years after the events of The Handmaid’s Tale, the theocratic regime of the Republic of Gilead maintains its grip on power, but there are signs it is beginning to rot from within. At this crucial moment, the lives of three radically different women converge, with potentially explosive results.

The New York Times said, “Atwood’s sheer assurance as a storyteller makes for a fast, immersive narrative that’s as propulsive as it is melodramatic,” while The Guardian wrote that Atwood’s “angry, pacey sequel to The Handmaid’s Tale admits a ray of light into Gilead’s toxic world”.

Writing on the story behind her book for The Guardian, Atwood said: “In many ways, The Testaments is an answer to all the questions readers have been asking me about The Handmaid’s Tale over the years. But it also belongs to our moment of history, when things in a number of countries seem to be heading more toward Gilead than away from it”.

Girl, Woman, Other follows the lives and struggles of 12 very different characters. Mostly women, black and British, they tell the stories of their families, friends and lovers, across the country and through the years. Joyfully polyphonic and vibrantly contemporary, this is a new kind of history, a novel of our times: celebratory, ever-dynamic and utterly irresistible.

The New Statesman said of Evaristo that “if you want to understand modern day Britain, this is the writer to read”, and called Girl, Woman, Other “a story for our times.” Stylist meanwhile described it as ‘’Exceptional. Ambitious, flowing and all-encompassing, an offbeat narrative that’ll leave your mind in an invigorated whirl’.

Writing on the story behind her book for The Guardian, Evaristo said: “Fiction excavates and reimagines our histories; investigates, disrupts, validates and contextualises our societies and subjectivities; exercises our imaginations through flights of fancy, takes the reader on transformational adventures, and probes and presents our motivations, problems and dramas. What, then, does it mean to not see yourself reflected in your nation’s stories? This has been the ongoing debate of my professional career as a writer stretching back nearly forty years, and we black British women know, that if we don’t write ourselves into literature, no one else will”.

See reading guides for The Testaments and Girl, Woman, Other.

See the full shortlist and longlist for the 2019 Prize.

Listen to the brilliant Booker Prize podcast audio series on Soundcloud with Joe Haddow from Radio 2.