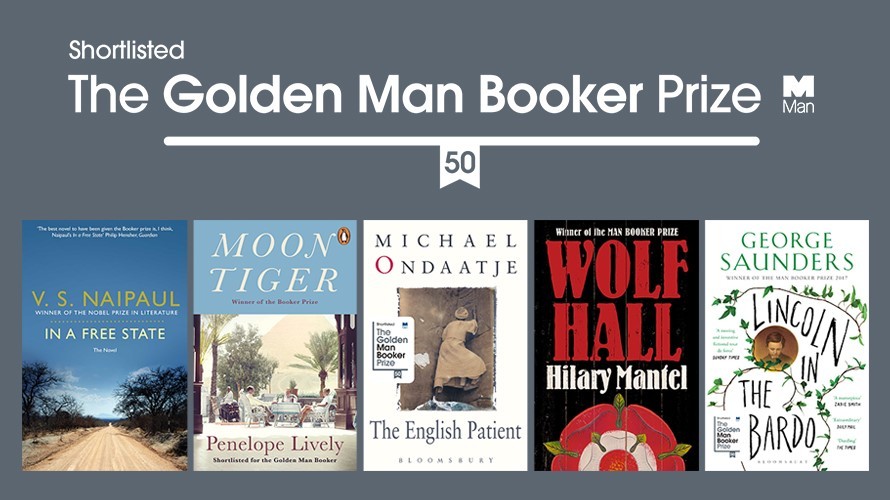 The shortlist for the Golden Man Booker Prize was announced on Saturday 26 May during a reception at the Hay Festival. This special one-off award for Man Booker Prize’s 50th anniversary celebrations will crown the best work of fiction from the last five decades of the prize.

All 51 previous winners were considered by a panel of five specially appointed judges, each of whom was asked to read the winning novels from one decade of the prize’s history. They have now chosen the ‘Golden Five’ – the books thought to have best stood the test of time.

“The Golden Man Booker Prize judges have chosen a hugely exciting list of five books from the last 50 years, which showcases what the Man Booker Prize is all about: fiction of the highest quality. I’m confident these wonderfully evocative novels will appeal to the readers of today and hope that this campaign helps to find these authors many new fans. Now it’s over to the public to decide on the overall champion!”

This award is particularly exciting, as the public will choose the final winner. Have your say on which book is your favourite from this shortlist by taking part in the month-long public vote, which will close on Monday 25 June. To help you to decide, the website will feature videos of each judge discussing their choice.

The winner, as chosen by the public, will be announced and presented with a trophy at Golden Man Booker Live, the closing event of the Man Booker 50 Festival at Southbank Centre on 8 July 2018 at 7pm. The star-studded event will feature the five judges debating their shortlisted books, along with readings from actors.

All 51 Man Booker Prize winners are still in print. Take a look at the full list and let us know how many you have read online using #ManBooker50.

Vote for your favourite of the ‘Golden Five’ shortlist on the Man Booker Prize website.

Review any of the shortlisted titles on our book reviews page by clicking a title above.

The Man Booker 50 Festival runs from 6 to 8 July across Southbank Centre’s 17-acre site in London. Events are being held in a variety of spaces, including the Royal Festival Hall, Queen Elizabeth Hall and Purcell Room. They range from interviews and conversations between Man Booker winning and shortlisted authors, to debates and masterclasses. The full programme and tickets are available now. A perfect evening out for your reading group.

To hear the most up-to-date news on the prize, listen to the Man Booker Prize Podcast series, and learn more about the prize’s history, visit their website.