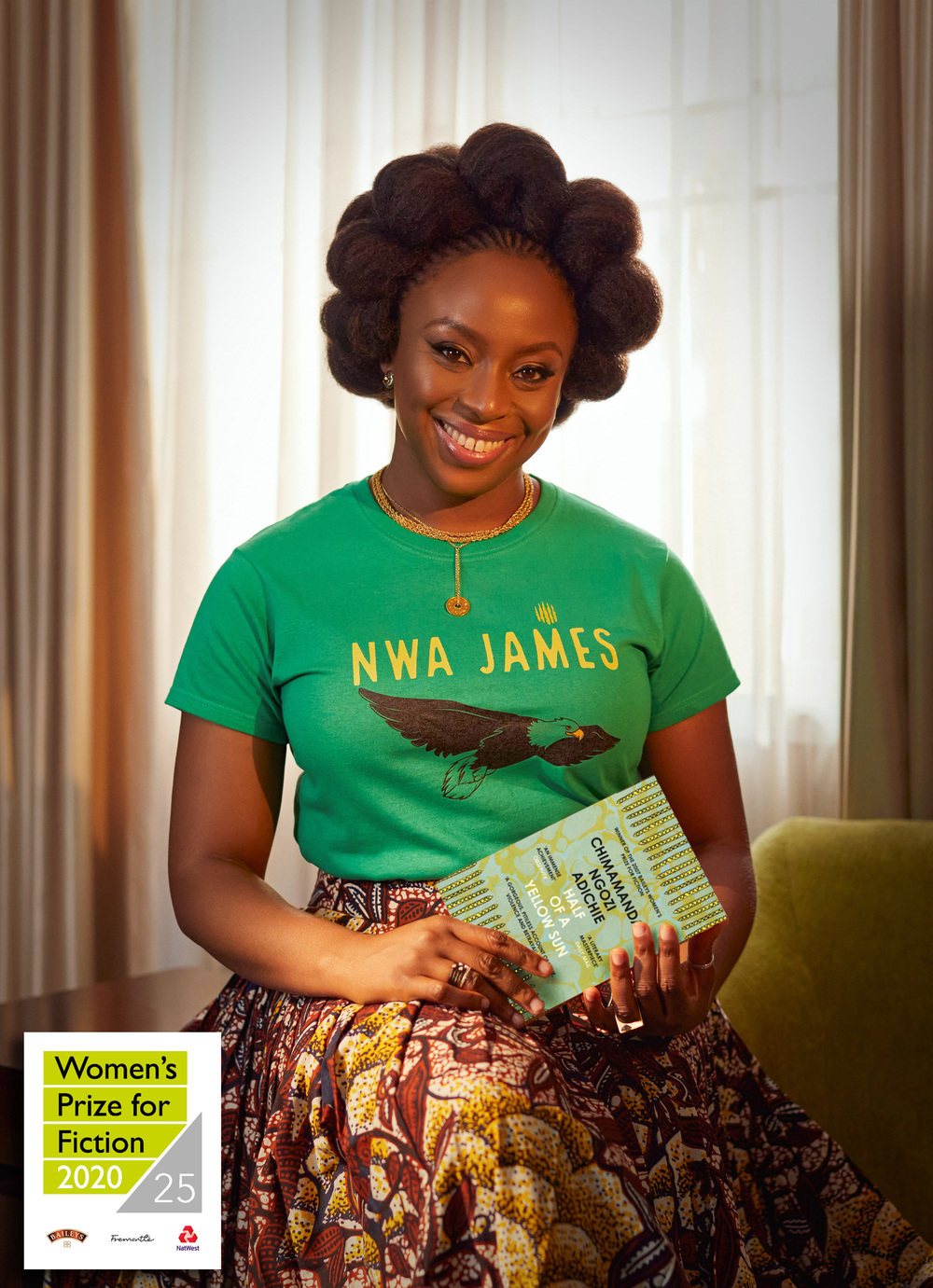 On Thursday 12 November 2020, Chimamanda Ngozi Adichie was awarded the Women’s Prize for Fiction ‘Winner of Winners’ for her novel Half of a Yellow Sun. The public chose Chimamanda’s novel over a stellar-line up including Zadie Smith, the late Andrea Levy, Lionel Shriver, Rose Tremain and Maggie O’Farrell, amongst others. This one-off award marks the culmination of the Prize’s year-long 25th anniversary celebrations, forming a key part of the Reading Women campaign which champions a quarter of a century of phenomenal winners.

Throughout 2020 thousands of readers embarked on a challenge to read all 25 previous winners of the Prize, joining the Prize’s digital bookclub to share their thoughts, and downloading our newly created online reading guides and exclusive author interviews. Over 8,500 people joined in the public vote from September.

Half of a Yellow Sun, Chimamanda Ngozi Adichie’s haunting novel, originally won the Women’s Prize for Fiction (then the Orange Prize) in 2007. Set in Nigeria during the Biafran War, the novel is about the end of colonialism, ethnic allegiances, class, race and female empowerment – and how love can complicate all of these things. First published in 2006, it garnered critical and popular acclaim around the world and was adapted into a film starring Chiwetel Ejiofor and Thandie Newton in the lead roles. This was released worldwide in 2013.

Adichie, currently in Lagos, Nigeria, thanked the Prize for this special award:

“I’m especially moved to be voted ‘Winner of Winners’ because this is the Prize that first brought a wide readership to my work – and has also introduced me to the work of many talented writers.”

Adichie has been presented with a specially-commissioned silver edition of the Prize’s annual statuette, known as the ‘Bessie’, which was originally created and donated by the artist Grizel Niven as part of the gift of an anonymous donor.

Waterstones and 4th Estate have created an exclusive hardback special edition of Half of a Yellow Sun, available to pre-order now from Waterstones priced at £18.99, for delivery from Thursday 26 November. The book will also be available to purchase as part of the event.

“I am thrilled that Half of a Yellow Sun has won the silver ‘Winner of Winners’. Our aim has always been to promote and celebrate the classics of tomorrow today and to build a library of exceptional, diverse, outstanding international fiction written by women. The ‘Reading Women’ campaign has been the perfect way to introduce a new generation of readers to the brilliance of all of our twenty-five winners and to honour the phenomenal quality and range of women’s writing from all over the world. Congratulations to Chimamanda Ngozi Adichie and here’s to our next quarter century!”

Chimamanda Ngozi Adichie grew up in Nigeria. Her work has been translated into thirty languages and has appeared in numerous publications. Her first novel Purple Hibiscus, published in 2003, was shortlisted for the Women’s Prize in 2005, and won the Commonwealth Writers’ Prize and the Hurston/Wright Legacy Award.

As well as winning the Women’s Prize in 2007, Half of a Yellow Sun (published in 2006) was a National Book Critics Circle Award finalist, a New York Times Notable Book, and a People and Black Issues Book Review Best Book of the Year. Her story collection The Thing Around Your Neck, was published to critical acclaim in 2009 and her latest novel Americanah, was published around the world in 2013, and was shortlisted for the Women’s Prize (then the Bailey’s Women’s Prize) in 2014. The book received numerous other accolades, including winning the National Book Critics Circle Award for Fiction and The Chicago Tribune Heartland Prize for Fiction. Americanah was also named one of The New York Times Ten Best Books of the Year.

Adichie’s non-fiction includes the book-length essay We Should All Be Feminists, published in 2014, and her most recent book, Dear Ijeawele, or A Feminist Manifesto in Fifteen Suggestions, published in 2017. A recipient of a MacArthur Foundation Fellowship, Chimamanda Ngozi Adichie divides her time between the United States and Nigeria.