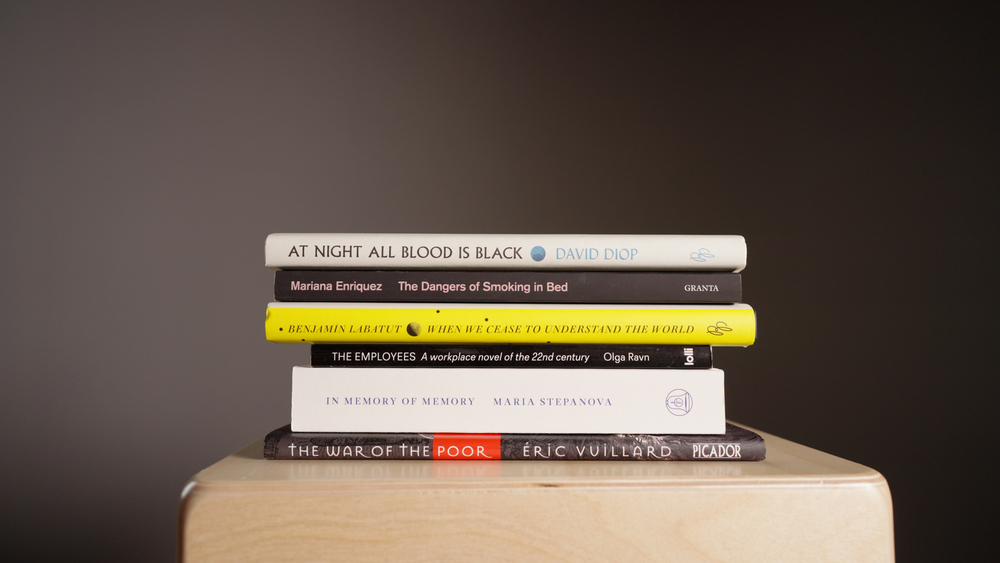 The judges of the 2021 International Booker Prize have revealed the six shortlisted books in contention for the prize, which celebrates the finest translated fiction from around the world. The shortlist was announced on The Booker Prizes social media and website.

At Night All Blood is Black by David Diop, translated from French by Anna Moschovakis. See the discussion guide.

The Dangers of Smoking in Bed by Mariana Enríquez, translated from Spanish by Megan McDowell. See the discussion guide.

When We Cease to Understand the World by Benjamín Labatut, translated from Spanish by Adrian Nathan West. See the discussion guide.

The Employees by Olga Ravn, translated by Danish by Martin Aitken. See the discussion guide.

In Memory of Memory by Maria Stepanova, translated from Russian by Sasha Dugdale. See the discussion guide.

The War of the Poor by Éric Vuillard translated from French by Mark Polizzotti. See the discussion guide.

This year’s shortlist features titles translated from four languages: Spanish, French, Russian and Danish, with their authors hailing from five different countries. Within the impressive shortlist are stories tackling themes of war, human cruelty, urban myth, scientific advancement, workers’ protest, and a longing for humanity and human connection. Whether set in 16th-century Europe or 22nd-century outer space, the books share an urgent relevance.

Two-thirds of the shortlisted authors are published in English for the first time, having already won awards in their own languages. Revolutionary in form, in content and in point of view, the books on this year’s shortlist are all urgent, energetic and wildly original works of literature. The stories told include: terrifying tales of unruly teenagers, crooked witches, homeless ghosts, and hungry women set in contemporary Argentina; the historical account of two Senegalese soldiers fighting for France during the first world war; the lives of the crew working on the Six-Thousand Ship in the 22nd century; stories of the defining moments from the history of science; the exploration of cultural and personal memory, using the author’s Jewish family in Russia as the basis; and a tale of rebellion against power and privilege set during the Protestant Reformation in 16th-century Germany.

What the judges said

Lucy Hughes-Hallett, chair of the judges, says: ‘Our six shortlisted books, chosen from 125 submissions, are all extraordinary, and wildly unlike each other. We have the genres of sci-fi and ghost-stories being brilliantly subverted and repurposed. We have biographical essays opening out to become blazingly imaginative testaments to the strangeness of the universe or the cruelty of human injustice. We have a hallucinatory and terrifying vision of the madness of warfare. We have a meditative journey into a family’s history that becomes a profoundly moving story about the way time eventually bears us all away. To arrive at this list we had – regretfully – to eliminate numerous books we enjoyed and admired. These six, though, seemed to us outstanding. Their differences demonstrate how vital the art of fiction is worldwide. What they have in common is their beauty, their originality and their power to grip the reader and excite new thoughts. It is a privilege to be part of a prize that spreads the word about such remarkable books to English-speaking readers, that looks beyond national boundaries to honour authors wherever they come from, and that rewards the translators who reveal their work to us.’

Tell us about your reading

Are you reading, or planning to read, any books from the International Booker Prize longlist? We’d love to hear from you! Tell us what you’re reading, where you get your recommendations from and what you think in this short survey.

Listen to the brilliant Booker Prize Podcast with Joe Haddow.