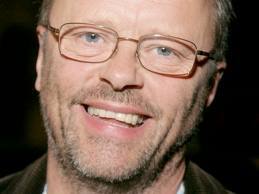 Join us on Tuesday 10 July at Birmingham LibraryTheatre for a live literary event unlike anything else you’ve seen.

Four Unbound authors – Robert Llewllyn, Adrian Teal, Stevyn Colgan and George Chopping – will go head-to-head pitching to raise funding for their book ideas, in a cross between an election hustings and a literary Dragons’ Den. Listen to the pitches, the extracts, the carefully framed arguments, the wit, the passion, the pleading and then you – the potential reader – can decide which books you’d like to see published and pledge for them on the night.

“Unbound is a simple idea – by putting readers and writers in direct contact, we believe we’ll end up with books that writers want to write and that readers really want to read. And there’s no better way of testing the concept than by doing it live, and no better place to do it in than in libraries, the engine rooms of reading across the UK.” – John Mitchenson, Publisher and Co-founder, Unbound

The Unbound writers who’ll be pitching

George Chopping is a poet from Torquay. A few years ago he left a glittering career as a shelf filler for a major supermarket and began to perform his work around the country, which people seem to like – John Hegley has called him “the cream of Devon poets”. George has lots of swimming certificates but since he’s been defecating into a bag he tends not to swim so much. He has a strong dislike for people sitting next to him on trains whilst he writes and will only attend weddings that have a spit-roasted suckling pig and an unlimited supply of fresh baps. He has a full driving licence with lots of endorsements, a Welcome Host Certificate, seven GCSE’s at grade C, Crohn’s Disease and, at times, very low self esteem.

Stevyn Colgan: For thirty years, Stevyn was PC Colgan of the Metropolitan Police. He worked in criminal intelligence. He researched and analysed crimes and community problems and helped design solutions that were more permanent and sustainable than the usual short-term enforcement-based tactics. Now Stevyn is an artist, author, songwriter and speaker currently living in Buckinghamshire. Among other things, he’s been a potato picker, a chef, a police officer and a lecturer. He has two books currently in print: Joined-Up Thinking (Pan Macmillan 2008) and Henhwedhlow (Kowethas 2010). The latter (translated by Tony Hak) is a re-telling of eight classic Cornish folk tales in both English and Cornish languages and is the largest collection of original Cornish prose currently in existence. For many years, we have known about something called Six Degrees of Separation; the idea that every person on this planet can be linked by a chain of just six, or fewer, individuals. Now I’ve designed a machine to do the same thing with facts; a kind of Six Degrees of Information. He has called it Connectoscope®

Robert Llewellyn wrote his first novel at the age of 12. By the time he’d published The Man on Platform 5, his first grown-up work of fiction, 30 years had passed. In the intervening period, he’d worked as an artist’s model, a bespoke shoemaker, a tree surgeon, a screenwriter, a comedian, actor and TV presenter. Robert has appeared on British television regularly since 1987 in various guises including under quite absurd amounts of rubber in Red Dwarf, covered in grease and dust in Scrapheap Challenge, in terrifying machines on How Do They Do It? and sitting in a car chatting in Carpool. News From Gardenia is his fifth work of fiction.

Adrian Teal used to get under everyone’s feet at the Spitting Image Workshop, receiving tuition from the head caricaturist with the kind forbearance of the show’s creators, Roger Law, Peter Fluck, and TV comedy guru John Lloyd. He paid his way through university by freelancing for various clients – including Madness – before setting up as a full-time cartoonist in 1996. At first, he concentrated mainly on work for commercial clients such as UBS, Jongleurs, and Anglia TV, and he even originated a line of sculpted, celebrity-caricature garden ornaments, which enjoyed a brief vogue. In around 2001, Adrian began to focus on political caricature, and cartooned for publications such as the Sunday Telegraph, the Scotsman, The Times Educational Supplement, Time Out, the Sun, and the Daily Mail. In 2008, Fate pushed him back into the path of John Lloyd, and he produced a cover and wrote/illustrated historical spreads for various QI Annuals. This, coupled with a regular cartoon slot for History Today_, set him thinking about the possibilities of popular history, and the_Gin Lane Gazette idea was born.

More details about the writers, their books and pitches can be found at: www.unbound.co.uk

How to book your tickets

Unbound, a revolutionary new way to get books published by involving readers, was launched at Hay Festival on 29 May 2011. Using the www.unbound.co.uk publishing platform, authors pitch their book ideas directly to their readers. Readers choose the ideas that they like on the website and pledge their support. When an idea has enough supporters, the book is written. If it doesn’t get enough support, it won’t. All pre-target supporters get their name printed in every edition of the book. All levels include the e-book and immediate access to the author’s shed, which offers the supporter extracts from work-in-porgress, draft jackets, competitions and regular updates form the author. Supporters of books that don’t reach their target receive a FULL refund. Unbound has succesfully funded 15 projects since it’s launch last year, and has another twenty projects currently being funded on the site. The company was winner of the FUTUREBOOK Innovation Award for Best Start-Up in 2011.