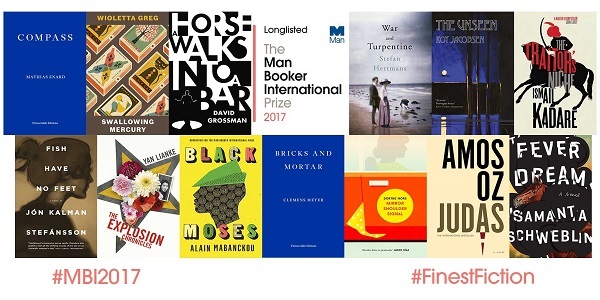 The Man Booker International Prize has today, Wednesday 15 March, revealed the ‘Man Booker Dozen’ of 13 novels in contention for the 2017 prize, which celebrates the finest works of translated fiction from around the world.

The prize is awarded every year for a single book, which is translated into English and published in the UK. Both novels and short-story collections are eligible, and the writer and translator are rewarded equally for their contribution.

The full 2017 longlist is as follows:

The longlist was selected by a panel of five judges, chaired by Nick Barley, Director of the Edinburgh International Book Festival, and consisting of: Daniel Hahn, an award-winning writer, editor and translator; Elif Shafak, a prize-winning novelist and one of the most widely read writers in Turkey; Chika Unigwe, author of four novels including On Black Sisters’ Street; and Helen Mort, a poet who has been shortlisted for the T.S. Eliot Prize and the Costa Prize, and has won a Foyle Young Poets of the Year Award five times.

The 13 longlisted books have been translated from 11 different languages, across Europe, Asia, South America, Africa and the Middle East. The winner of the first ever Man Booker International Prize in 2005, Ismail Kadare, is on the longlist, along with three authors who have been finalists for the prize and two who have novels published in English for the first time.

“It’s been an exceptionally strong year for translated fiction. Our longlist consists of books that are compulsively readable and ferociously intelligent. From powerful depictions and shocking exposés of historical and contemporary horrors to intimate and compelling portraits of people going about their daily lives, our longlisted books are above all breathtakingly well-written. Fiction in translation is flourishing: in these times when walls are being built, this explosion of brilliant ideas from around the world arriving into the English language feels more important than ever.”

We have an exciting opportunity for reading groups to shadow the prize shortlist this year. Six lucky groups will be chosen by the prize and will receive 10 copies of one of the shortlisted books for their group. In exchange, the group will read and review their title, and take part in the #MBI2017 conversations across Twitter, Facebook and Instagram.

Log in and visit our Noticeboard for your chance to take part.

What do you think of the 2017 longlisted titles? Which have you read and what will be added to your TBR pile? Add your comments below, or click any title above to leave a review.